Meet Prishtina Developers (PrDev), a start-up founded in 2013 by determined and aspiring young Kosovars aiming to develop more apps for everyday users. Recently, PrDev launched a new game on Android called “Ngjyrat” (eng. Colors) based on the Stroop Effect, which speeds up with every point you score; making the game very competitive and allowing the user to compare scores with players worldwide.

Aiming to develop Mobile and Web apps for businesses and everyday users, PrDev works based on the motto “It’s all about the User.” Currently, the team consists of three people: Drilon Reçica, a mobile application developer (Android, iOS), Kastriot Çunaku, a graphic designer and web developer, and Amra Sezairi, an Android App Developer. Their main areas of expertise are WEB, Mobile App Design and Development, Graphical Design, and Branding.

When asked about the inspiration behind the creation of the newest app “Ngjyrat,” Reçica explained for KosovoDiaspora.org that the idea came spontaneously; “while working in our office we were kind of bored and thought why not develop our own game, so that we can have some fun when there is free time.” Moreover, he talked about the language choice of the game, – Albanian- stating that they wanted to design and develop a game that “every Albanian whether they know a foreign language or not may be able to play this game.”

In addition to the timed bar that gives the “Correct / Incorrect” options, the user is also presented with the game achievements that one gets after scoring certain amounts of points which are based on everyday funny jokes, and topics that young people are faced with everyday. Therefore, PrDev promises that if you download the game you will certainly have fun. 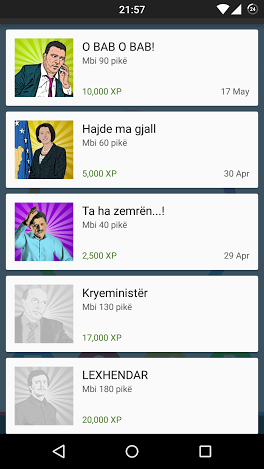 While, this app is a great way to spend time doing something fun according to PrDev, it could also be a great way to learn and improve your Albanian skills, especially for the foreign audience and young diaspora members.