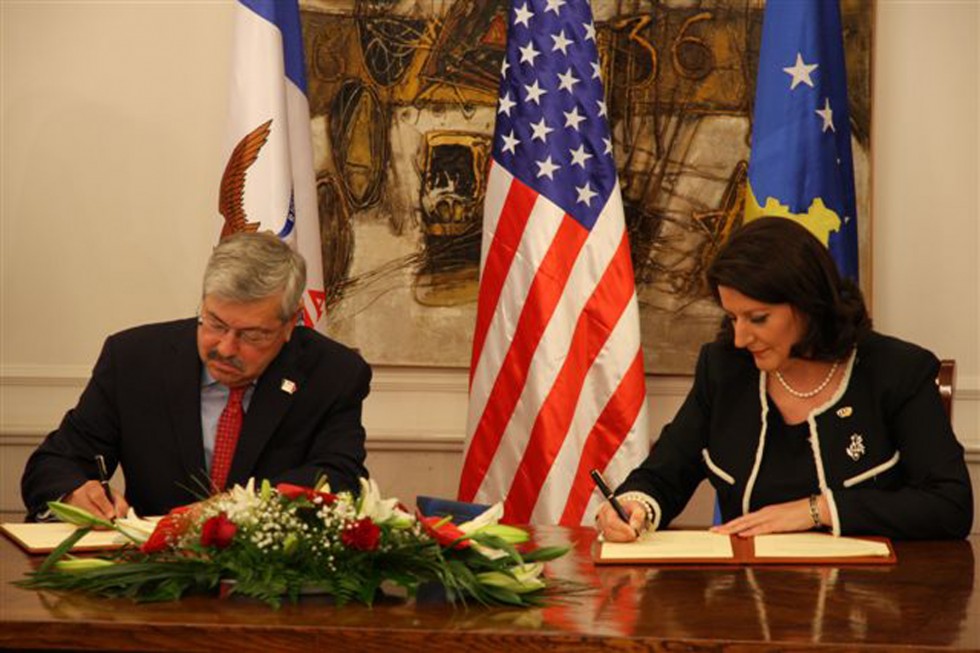 The Kosovo-Iowa partnership should be a proud collaboration for both citizens of Kosovo and the denizens of Iowa. Given Kosovo’s short lifespan as an independent country, it is remarkable to see such a small nation establish links across trans-continental borders.

To understand the monumental leap Iowa has made, one first has to understand a little about the state of Iowa itself. Iowa is not a state teaming with diversity. The most trans-continental we Iowans get on any given night, is going to the local Mexican, Chinese, or Italian restaurant. Iowa’s primary method of economic income is agriculture. This is everything from food crops, specifically corn and soy beans, to selling tractors and tractor parts. The average high school student would not be able to point out Kosovo on a map, let alone be knowledgeable of the partnership just formed. I, myself, a fairly well-read and informed individual was notified from a friend, who is the only Kosovar I know. Iowa is not the birth place of culture. It is a place of cornfields, soy beans, and farmers. This is why I was surprised and little proud to learn of Iowa’s partnership with Kosovo

My first introduction to Kosovo was through a good friend. I remember asking her where she was from and she said with great pride “Kosovo”. I just nodded my head like I knew what she was talking about, but in reality I hadn’t even heard of Kosovo. Having never heard of the country called Kosovo, that night, when I got home from school, I researched a little about it. I learned that Kosovars had just recently declared independence from Serbia. I live in a state that is in a free, independent country, something that I took and still occasionally take for granted. I cannot imagine living in a place that is not already free, nor can I conceive being alive to witness my own nation’s birth.

What began as a military partnership has developed into something much more. Kosovo, but also Iowa, must be vigilant however, and continue to further pursue other ways to partner outside of the realm of agriculture. There is so much more that we can learn from each other. I stress the words “each other” because in order for this partnership to be fruitful, it can not be one sided. Iowa has as much to learn from Kosovo as Kosovo does from Iowa. The first step in any partnership is education. We must continually educate each other for the benefit of both of our existences. Iowa and Kosovo must keep the channels of communication open, so as to ensure that both parties are able to take full advantage of this partnership.

The greatest way to learn is to experience something first hand. If Iowans, specifically students, had the opportunity to see Kosovo , it could be the start of something beautiful. Fewer people have greater drive and motivation than that of students and as Iowa is one of the leading states in education in the nation, it is fitting that Kosovars educate our students in their ways and customs. Iowa students should be exposed to something outside their “comfort zone”. While the current arrangement is a good beginning, it is the future generations of Iowans and Kosovars that will continue this partnership. How can one understand the other if we are never given the opportunity to observe?

Bravo Kosovo for reaching outside your borders, and kudos to Iowa for striving for diversity. Look forward to our continuing partnership.

Kayley Grant is a graduate of Wartburg College, where she studied Biology, Political Science, and Spanish. She will be a first year law student at Drake Law School in Des Moines, Iowa. She is currently working as a legal assistant at Klatt Law Offices, P.C.