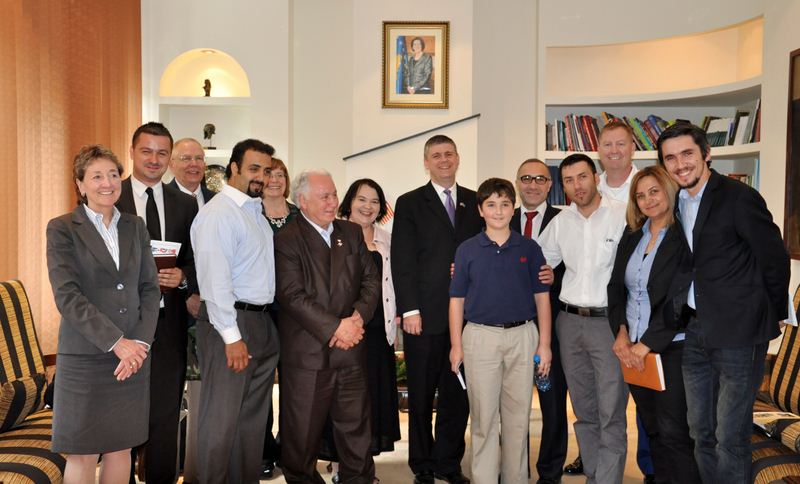 Iowa – Kosovo: A Development in Partnership

After formalizing the sister-state partnership program which commenced back in March 2011, Kosovo and Iowa are at the forefront of developing different mutual projects. The relationship that started with 700 Iowa National Guard soldiers that served as part of the NATO peacekeeping mission in Kosovo is going to expand in the upcoming months. A great example of these partnerships is a new cooperation in the fields of culture, sports, youth and cultural heritage.

A delegation from the State of Iowa in the United States of America had a meeting with the Deputy Minister of Culture, Youth and Sports, Hajdin Abazi, with whom they discussed on culture, sports, youth and cultural heritage, with a special emphasis on the opportunities of cooperation in these fields. The organization of Sister States aims to reach partnerships with States of the world in various fields.

The Deputy Minister Abazi, while talking for the achievements and challenges, has informed the guests with the developments in culture, sport, youth and cultural heritage. He said that numerous tangible results have been achieved in the last years. He also emphasized the cooperation of Kosovo with many States in the field of culture. Abazi said that the MCYS is interested in promoting its culture and enhancing cultural exchanges in other fields. In this respect, he expressed the commitment of the MCYS for cooperation with Iowa as well.

On the other hand, Tom Rial, the President of this organization, discussed the organization of activities and on this occasion expressed his interest in establishing relationships between artists, athletes and youth of Kosova and Iowa.

In this context, it was agreed upon to continue coordination to develop joint activities in Kosovo and Iowa in the near future.