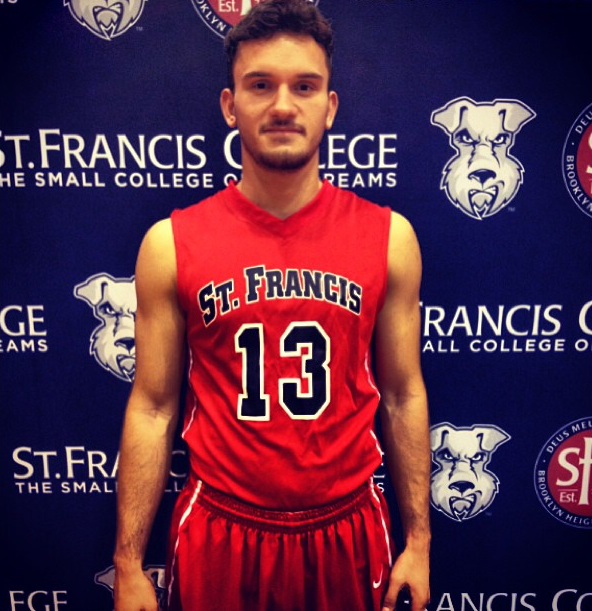 Edon Molla is a Division I College basketball player for St. Francis College in New York. He is striving to become the best college basketball player he can be while remaining focused on his academics. His life-long dream is to have a future professional career in the NBA or Europe and to one day represent the Albanian National Team.

His family moved to New York when he was an infant. Playing basketball has been an early dream of his; he started playing basketball when he was 5 years old. Edon Molla won two New Jersey State Championships, two Tournaments of Champions Titles, and two U.S.A. National Championships. He also served as Team Captain senior year of high school at St Anthony High School. In 2012 Edon Molla was selected to the New Jersey All Stars Team that played against Connecticut (CT vs. NJ All Stars Game). Edon Molla and his team were honored by the Governor of New Jersey Chris Christie for their first national championship and the New York Yankees at Yankee Stadium for winning their second national championship, back to back national titles.

At 8 years old, Edon joined his first team, St Columba, where he played until he was 13 years old. By the age of 10 he was playing on the 13-year-old team. When he was 13 years old he led St. Columba to the New York City championship game in which they lost. Although they lost he had gotten the attention of many high school coaches in New York and New Jersey. Edon Molla also appeared on his first newspaper article at the age of 13.

Edon has played in some of the most prestigious leagues and tournaments in the country including: Hoop Group Elite Camps, Five Star Camp, Nike IS8 League, Nike West 4th League, Rumble in the Bronx Tournament, Naismith Hall of Fame Tournament, Dan Finn Classic, Boast Mobile SNY Invitational Tournament, etc. His basketball prowess wasn’t limited to New York and New Jersey. Since the 6th grade he has traveled across the country and played in tournament, camps and games in over 30 states.

In 2009 he decided to attend St. Anthony High School in Jersey City, New Jersey. St. Anthony high school is considered the greatest high school basketball team in American history and is the most prestigious and most successful. In the past 40 years under legendary head coach Bob Hurley St. Anthony has won 27 state titles more than any other school in U.S. history, 13 tournaments of champions, and four consensus national championships and enjoyed seven undefeated seasons. In 2010 Coach Bob Hurley was inducted into the World Basketball Hall of Fame.

In 2011 Edon and his teammates were honored by The Governor of New Jersey Chris Christie for their first national championship and by the New York Yankees at Yankee Stadium for winning second national championship, back to back national titles. Also the team was on several TV shows such as CBS 60 Minutes ABC 2020 and TLC Cake Boss, and a book “Chasing Perfect” by Daniel Pasner.

In 2013 Edon Molla joined St. Francis College to pursue double major in Business & Public Relations. Currently Edon Molla is a Division I College basketball player for St Francis College. Division one is the premier division for college athletics, where the best high school players are chosen to play college basketball. St. Francis has a promising team. This is his first year at St Francis they have a record of 9-5, recently beating the University of Miami.

Edon’s favorite athletes are Kobe Bryant and Lorik Cana. He enjoys watching NBA other college basketball games and Albanian sports, including the Albanian National Football team and Kosovo basketball league, especially teams such as Trepca, Peja, SigalPrishtina and Bashkimi. His dream is to become a professional basketball player in the NBA, or in Europe. Edon hopes to one day represent Albania and Kosovo on a National Basketball team.

“National pride and giving back is important to me. I look up to athletes who give back to their community or country they come from, I have tremendous respect for athletes who go back to play for their national team and represent their country. In the future I can see myself playing for the Albanian National Basketball team and trying to inspire Albanian kids to pursue a basketball dream,” said Edon Molla.