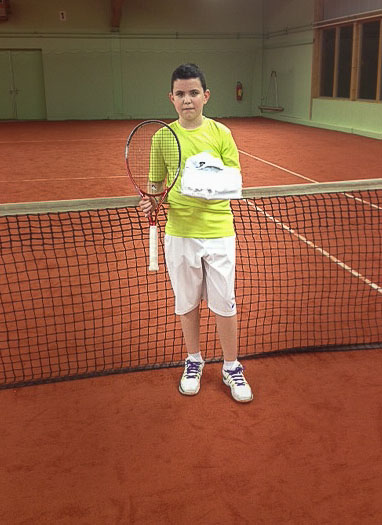 Roger Federer is my idol

Talented tennis player Artan Sadriji is establishing his name in the Swiss junior league as well as his homeland Kosovo where he won the Prishtina Open 2012. This 11-year old is known by his coaches and his parents as a serious and devoted tennis player with a great potential. However, when you ask Artan about it, he modestly states that he always simply aims to improve his weaknesses.

11-year old Artan Sadriji reached the quarter-finals in the younger-than-12 category at the tennis championship in Kriens, Switzerland. His coach and teammates from Spreitenbach-Aargau team are as proud as the Albanian young talent’s parents.

Aware of his skills but also of his flaws, Artan knows exactly what he wants and what he can achieve in the future with hard work and determination. The reason he did not get into the semi-finals at the last tournament was not only the tough competition but also his foot injury. Thanks to his parents, however, he has a strong will and a positive attitude, which allows him not be only focused on winning, and lets him take pride in participating and competing as well.

Artan’s friends and family are not the only ones who appreciate his improvements. Sponsors are constantly showing interest in Artan and his extraordinary talent.  Swiss tennis association is his main sponsor for the upcoming season but certainly not the only one. When he was asked who his favorite player was by the Albanian journal Albinfo Artan answered: “Roger Federer is my idol.”

The crowned champion of the Prishtina Open 2012 in the younger-than-12 category Artan Sadriji will not stop at this tournament. In six months, he has another tournament that offers him an opportunity to get one step closer to his idol in his tennis expertise.