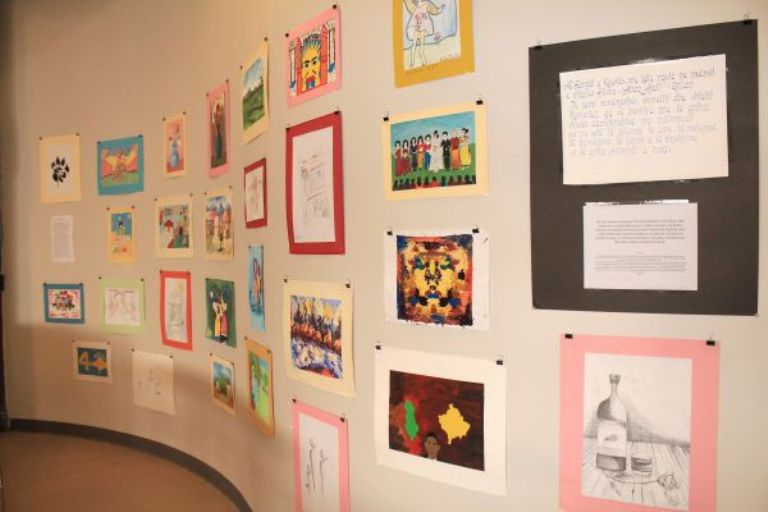 Kosovo Thanks Canada: Artwork by Kosovar Youth in Nova Scotia

A new showcase at the Craig Gallery at Alderney Landing highlights the artistry and shocking history of Kosovar youth.

‘Kosovo Thanks Canada: Artwork by Kosovar Youth,’ is currently on display until Sept. 30 at the gallery where visitors can look through images that illustrate both conflict and hope.

The exhibit will showcase artwork of students from the Abaz Ajeti Elementary and Middle School of Gjilan, Kosovo, and some works by other young artists from around the country.

The display is in Nova Scotia because of a unique connection to the province.

“Nova Scotia holds a particularly important place in the history of Kosovo refugees to Canada. Most of them felt safe and secure for the first time after they had been forced of their homes in Kosovo when they landed here at the Greenwood CFB in Nova Scotia,” says Faton ‘Tony’ Bislimi, founder of the Bislimi Group Foundation, who was born and raised in Kosovo, and is now a doctoral student at Dalhousie and an instructor of economics at the Mount.

“The purpose of this exhibit is symbolic. Kosovars are deeply thankful to Canadians for all they have done for them,” he added.

This exhibit is in appreciation for the role that Canada played as a NATO member in stopping the ethnic cleansing of ethnic Albanians in Kosovo during the Kosovo War of 1998-99 Bislimi said.

It is also a token of appreciation for the Canadian people who welcomed and supported thousands of Kosovar refugees who ended up in Canada in search of safety back in 1999.

To show this feeling of gratitude to Canadians, Hajdin Abazi, Deputy Minister of Culture of Kosovo and Xhevat Latifi, artist and schoolteacher of the Abaz Ajeti School, joined Bislimi in opening the exhibit on Aug. 30,

Many Kosovo people who fled to Canada have stayed and now call the country home, this exhibit will serve as a way for Kosovar-Canadians to learn about their heritage and beginnings.

Hosted by the Craig Gallery at Alderney Landing on the Dartmouth waterfront, the Market Gallery is open from 7 a.m. to 7 p.m. daily, closed holidays.