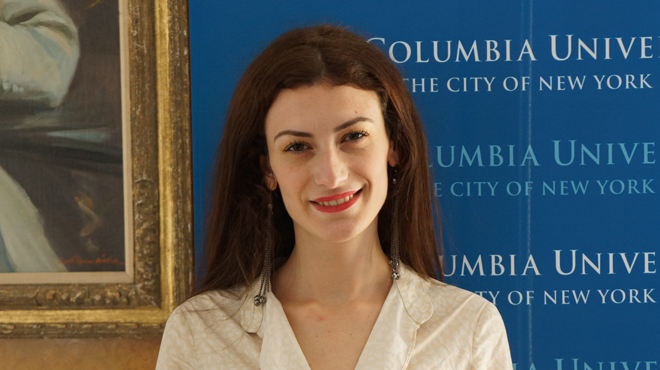 In an interview for the Columbia University SIPA Magazine, Rina Lila shares her story and involvement with the succesful online media campaign, the KosovoDiaspora Initiative.

Born and raised in Kosova, Rina Lila MIA ’15 came to the United States in 2005 to finish high school in southern California; she went on to major in political science at Whittier College. Lila spoke with SIPA News about growing up in Kosovo, the impact the United Nations has had on her life, and being a part of Kosovo Diaspora in New York City.

Kosovo Diaspora’s upcoming event, “From a Concept to Success: Focus Group on the Diaspora Virtual Registration,” will be held at 6:30 p.m. on Friday, November 14, in room 1302 of the International Affairs Building.

Tell us a bit about Kosovo Diaspora.

A former SIPA student, Behar Xharra MIA ’12, established the Kosovo Diaspora initiative, which is meant to raise awareness on Kosovo, and to highlight Kosovo through digital diplomacy. We want to make available positive digital media about Kosovo.

Behar graduated in 2012, before you came to SIPA. How do you know him?

Everyone from Kosovo knows each other. Behar actually convinced me to come to SIPA. [I was considering other schools], but he told me that SIPA is more international. He said you have more international students, you get to make more connections, it’s close to the United Nations—it’s an invaluable experience. So I came here. Then, last year, he got me involved with the Kosovo Diaspora.

Tell us more about the Kosovo Diaspora event you’ve planned for this Friday [November 14].

This year Behar asked me to lead the first focus group discussion on diaspora registry. Kosovo Diaspora is partnering with International Organization for Migration (IOM) and the Kosovo Ministry of Diaspora to promote the registry among our widespread diaspora communities across five continents. The information collected will provide the Kosovo government with a better understanding of geographic and demographic profile of Kosovo Diaspora in order to establish evidence-based policies in Kosovo to address the needs and concerns of diaspora worldwide. As Kosovo Diaspora, we see a lot of potential to having a database of all Albanians everywhere, while working on our mission to digitlize diplomacy. The mission of this diaspora virtual registration is to bring together Albanian civil society leaders, successful entrepreneurs politicians well as students.

Where does your interest in politics and the Diaspora stem from?

I grew up in Kosovo during hard times. I experienced the war. I lived under an oppressive force. I saw the United Nations come in, and this changed my life. So, I wanted to focus on international affairs. I remember peacekeepers coming to Kosovo when I was little, and running to them. I was 11. Since then, I thought “I want to do something like that.” The firsthand experience of war stayed with me.

Until 2008, I didn’t have a Kosovo passport, I had a UN passport, and I was always passionate to see how the UN works. The UN played such a big role in our country. And when Kosovo declared independence, I wanted to see what I could do. Now we’re working on Kosovo’s recognition.

You are currently interning at the UN; tell us about that experience.

I am one of the Albanian advisors for the Albanian Permanent Mission to the UN. I was just in touch with people from the mission and I told them I was interested in representing Albania in the UN. Now I am in the second committee and I listen to the speeches and all the agendas. It is mostly on financing and economics. The main discussions are currently on the post-development goals, so we talk about how to come up with finances.  Sometimes I also do the third committee, and that one is in human rights.

Do your interests lie more with human rights or economic policy?

How are your studies at SIPA related to this?

My concentration is in Economic and Political Development, and my specialization is in International Conflict Resolution. I am one of the co-presidents for the UN Studies Working Group and the Conflict Resolution group and I work very closely with Professor [Elisabeth] Lindenmayer as one of her course assistants. She’s been an inspiration for me with respect to the UN. I’ve always wanted to work for the UN. The fact that the UN was here was the main reason I wanted to come to SIPA.