Good will Ambassador Emma Watson called on everyone to participate in the UN’s HeForShe campaign. The campaign is based on the premise that “gender equality is not only a women’s issue, it is a human rights issue” that requires everyone’s participation. “Lifting women up lifts up our economy, and lifts up our country. We have got to make sure that somebody is standing up for them,” said President Obama in support of the campaign. UN Women aims to engage 1 million men and boys as agents of change for achievement of gender equality by taking the HeForShe pledge. 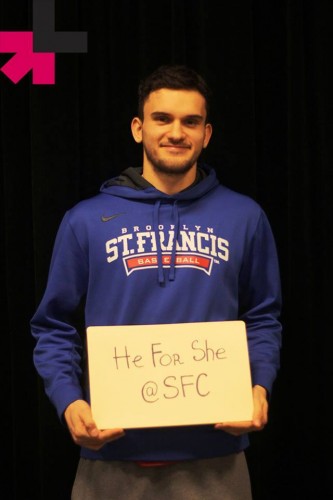 Basketball star Edon Molla joined the solidarity movement in support of “HeForShe” campaign. Molla was also selected to give a speech regarding gender equality recently through the HeForShe campaign. He will continue to advocate toward raising awareness for the many injustices towards women in the world. The HeForShe campaign was started by British actress Emma Watson in September of 2014, when she addressed the issue of gender equality at the United Nations headquarters in New York. The name of the campaign, “HeForShe”, represents the importance of male involvement and support of feminism. It calls on men who agree with gender equality and is a cause that Edon Molla supports and is advocate of.

At College, Edon Molla and his team had a record of 25 wins and 12 losses; they won the regular season conference championship and played in the NIT playoffs where they lost to the University of Richmond. Edon has two more years of college basketball and is looking to improve over the summer and have a bigger role in leading his team toward a championship. Edon is also an honor roll student with a 4.00 GPA.

According to Molla, “School comes first. If I had to pick between school and basketball I would pick school. I currently have a 4.0 GPA and plan to keep that up. I would like to go to Harvard, Columbia or New York University for a master’s degree; such schools are considered elite universities in the United States and the world. It is a constant battle between academics and basketball, but I think finding that balance is what keeps me going and pushing to be the best that I can be.”

During an interview with KTV Interaktiv Bujar Mehmeti and Xhemajl Rexha, Edon said he was ready to play for the Kosova National Basketball Team and that his brother is in contact with the Basketball Federation. “My family and I have been in contact with the Basketball Federation of Kosova, hopefully everything works out. I think Kosova can have a great national team and can compete against other countries. A lot of good players in Kosova. I really think we can compete and have success in the international level.”

A few other European teams have also reached out to Molla, but for now he has two more years with his current team. “I would love to play basketball in Europe because all of my family is in Europe and that would be great. Basketball in Europe is getting better every year so it would be great opportunity. A lot of NBA players have played in Europe for a few years and then have had a chance to play in the NBA afterwards. The dream is to play in the NBA one day, it’s what I work for every day, I definitely think with hard work and dedication I can achieve it. I’ve played with and against a lot of players in the NBA, I’m good friends with a few players. That gives me confidence and persistence to work harder toward that dream.”

Molla attributes his work ethic to his parents who support him all the way. At 13 years old Edon appeared in his first newspaper article, the Brooklyn Currents, where his dedication and sacrifices were captured. A reporter saw Edon along with his mother, Merita, and brother, Edon waiting for the bus after the game. The interview spoke about how Edon, along with his family were willing to travel four hours using various trains and buses to make it to the games and practices. This work ethic was based on his parents’ values who immigrated to the United States escaping the war in their homeland, Kosova. Edon Molla was also recently featured in an article in Respect Magazine by Peter Eboli where he discussed the family’s sacrifices.

Outside of juggling school and basketball, Edon Molla will be modeling for CATM an agency in NYC and hosting a basketball camp with Xharra Group over the summer in Prizren.