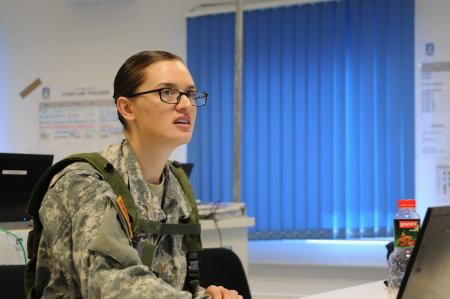 As a 10-year old girl Yllka Cana went to school every day where she and her family lived. Like many in Livoq, a village outside Gjilane, Kosovo she and her friends spent the summer of 1999 playing games and being kids. While tensions mounted all around Kosovo, they never thought their lives would be turned upside down. As the situation continued to deteriorate and violence escalated, Cana and her friends were not allowed to begin their fourth grade year.

In the 1980s, opposition to sovereignty of Yugoslavia caused rioting in Pristina. Ibrahim Rugova, leader of Kosovo Albanians, initially advocated non-violent resistance. As tensions mounted, the opposition evolved into a separatist movement, and the Kosovo Liberation Army took a different stance to the resistance.

The KLA launched a guerrilla war that featured regular attacks on Yugoslav security forces. In spring of 1998, the Yugoslav military partnered with Serbian police to fight the separatists. In the months that followed, thousands of civilians were killed and more fled their homes. The United Nations High Commissioner for Refugees estimated that 460,000 people had been displaced in the year prior to NATO’s involvement in March 1999.

UN reports estimate that nearly 40,000 Albanians fled or were expelled from Kosovo between March 1998 and the end of April 1999. Most of the refugees went to Albania, the Former Yugoslav Republic of Macedonia, or Montenegro. Thousands more were driven out by intimidation, attacks and a wave of crime after the conflict as NATO’s Kosovo Force struggled to restore order in the province.

Fourteen years later, Cana, who had relocated to Allentown, Pa., early in 2000, is sitting in the principal’s office at the very school she attended in Livic. She is now a first lieutenant in the U.S. Army, deployed as part of KFOR.

“The local shops closed” said Cana, remembering that part of her childhood. “All that could be heard was shots and the ground shaking from bombs. It all happened very fast.”

For their safety, Cana, her mother, three sisters and two brothers went to Camp Stankovec, a refugee camp in FYROM. Her dad stayed behind to work with KFOR at Camp Monteith, rejoining them in 2003 in Pennsylvania.

Being back in Kosovo brought back a lot of memories Cana had tried to forget.

“I remember playing games with my friends,” she said. “I remember being very close to people, I knew everyone,” she said. “I remember laughing and being really silly. I remember playing soccer outside the school. It was a lot of fun growing up here. If you told me then that I was forever going to leave this place and go to another country, learn a new language and make new friends I would not have believed you. Some of the best memories were made here, and I am so happy that I can remember them.”

As Cana overcame the odds in America, she received her education, going on to study international relations and political science at Lehigh University, in Bethlehem, PA. There she was part of the Reserve Officer Training Corps. She always remembered the American soldiers she met in 1999. They were superheroes to her.

“Growing up in a war-torn country one truly understands the pain and hardship that people experience, especially children,” said Cana. “The experience growing up here made me want to join the military. I always wanted to be that person that went to a school and helped someone else, because 14 years ago I was on the other side, I was that kid who needed gloves. I know first-hand how much it means. Our time is essential, and true aid comes from ordinary people, crafting a better future for someone in need.”

When her first deployment happened to be to the very place she left all those years ago, it was almost a surreal experience.

In the end, her reasons for coming were stronger than her fear of returning.

“I came because I thought about all the soldiers that have deployed here and risked their lives to save mine, soldiers that left their families to make a difference, and now it’s my turn. I had to do it, and I will continue to do it no matter where in the world.”

Cana brought Sgt. Maj. Timothy Griffith to visit the town she grew up in. They visited her house, and her elementary school. He said that he believes that no matter where you are, education is most important.

Cana tried to hide her squeals of excitement, as she walked into the same classrooms she had sat in 14 years ago, and saw teachers she had had all those years ago. With Griffith, they talked to the new principal and the teachers to see how the officers at Camp Bondsteel could help this school.

“We can’t do the big stuff, the construction and what not, but I can focus on the smaller stuff,” said Griffith, who has been with South Carolina’s 218th Maneuver Enhancement Brigade for the last 31 years. “The science teacher said it would make his class much better if he had microscopes. The art teacher had limited brushes, small amounts of water colors, and the kids are very talented. It doesn’t seem like much, but when these are in limited supply, it’s very much appreciated.”

Griffith and other senior officers don’t always get the chance to be a part of the community. They donated their own money to purchase microscopes, art supplies, warm gloves and hats, and smaller school supplies. They took the items back to Cana’s school, where the students and facility were very appreciative of the effort.

“As a senior leader, I am very busy. I get pulled from all directions, and I am just happy to be able to do this,” said Griffith. “Not only are we helping out the local community, but we are also showing our junior NCO’s, our junior officers that senior people care, too.

Cana agreed. Besides doing her work as an intelligence analyst, working with the children is the first reason she wanted to be a U.S. soldier. Sitting next to the man who taught her first through third grade, Cana laughs as she looks through old photographs and grade logs. She laughs as she explains that the numbers written are equal to an A or B in the American school system. She laughs, as her teacher tells her how she loved to learn and always wanted to do more.

Cana’s face blushed at the praise of her teacher, a man she says taught her so much, lessons she has taken with her through her travels. The value of kindness, of having compassion and gratitude for the life you have lived is best reflected in helping others. “Knowing that a great impact can be made on others’ lives, through simple actions, makes the work worthwhile,” said Cana. “Giving to the community provides a rewarding sense of pride. Each act of kindness and help contributes towards a brighter future for all.”

Nezir Jahija, Cana’s teacher, beamed with pride at the young woman sitting beside him.

“I am very proud of Yllka,” he said. “I knew that she would be successful by how hard she worked here. Now, she has decided to join the U.S. Army, which is the world’s best, most powerful army, with values that are unlike any other.”

The students here are very appreciative of what the soldiers have done, and the difference they have made here in Kosovo.

“The students are a younger generation and many were not alive during the conflict,” said Jahija. “The older generation, teachers, older students, we experienced it, we know the difference the army has made in Kosovo. The older generation does a really good job of telling the younger so that they can know the history of what happened here, and see the effort KFOR put into Kosovo. It is our responsibility to teach the students so they are aware of the history of their country.”

Hearing what KFOR does is one thing. Interacting with soldiers first hand is an experience for these students.

“Just knowing that KFOR is in their country, making a difference and trying to help people is one thing, seeing it in action is different,” said Jahija. “ For the students here, the visit will leave a lasting impression. When they can physically see the care and concern the Americans have for the people, it makes a huge difference. It goes from being something they believe is happening, to something they have concrete evidence of.”

Cana’s visit not only allows these students to interact with the soldiers they hear about every day, but gives them hope. She shows these students what is possible for a child who faced challenges and had to leave her home, said Jahija. Cana also helps to override the common tradition that women should stay within the home. As a soldier in the U.S. military, a native of Kosovo and a strong role model, she left a young, scared girl, only to return a strong and determined woman. Her return is not only felt in the school, but in the houses of the children, and in the community.

Being able to be a positive role model, like the soldiers Cana looked up to and respected when she was growing up means a lot to this young officer. More importantly, she is getting a piece of her childhood back. She always knew she would return to Kosovo, but the day-to-day distractions of life, of work, school, family all provided a way for her to continue to delay it. Halfway between laughing and crying, Cana said that now that she is here, seeing her school, her house with the dining room table leg that still has her name carved into it, a memory she had almost forgotten, she wonders why she waited so long to come back in the first place.