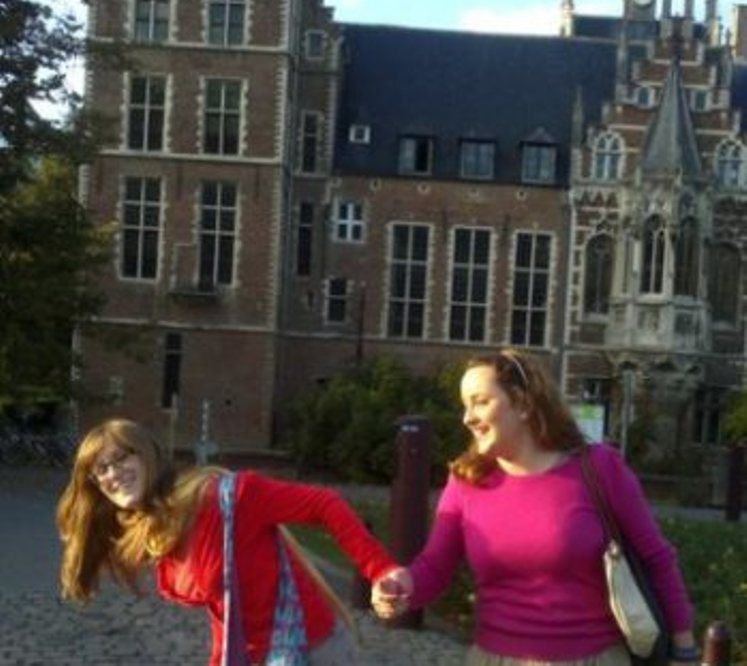 Yllëza Berisha and Besiana Musmurati are pursuing their Masters degrees at the Katholieke Universiteit Leuven in Belgium through the EU Scholarship Programme for Kosovo. The aim of the Young Cells Scheme, a joint collaboration of the EU and the Government of Kosovo, is to improve the professional capacity and expertise of civil servants in key sectors of Kosovo’s public administration by enabling young Kosovars to study at renowned European universities. Yllëza and Besiana are among 200+ students who have received scholarships to study various subjects such as law, economics, environmental sciences, agricultural studies, statistics, aviation safety, engineering, telecommunications, etc.

Kosovo Diaspora talked with these two enthusiastic students about their studies, living in Belgium, and future plans. Yllëza is pursuing a Masters in European Studies and Besiana is studying European Politics and Policies. Except the unpredictable weather, they talk fondly of Leuven, whose population swells during the academic year with over forty thousand students from around the world. The medieval architecture and the friendly locals make the city enjoyable and welcoming, says Besiana. Learning to decipher food packaging that is labeled only in Dutch, French, or German was quite a challenge at first, says Yllëza lightheartedly. Both of them like to explore the city in their free time and try new dishes of international cuisines.

Besiana points to the limited knowledge on Kosovo by many students in Belgium. She says that young Kosovars can improve their country’s image by being great students and good ambassadors. Since many Belgian students are keen to explore Kosovo’s culture and traditions, Besiana and Yllëza plan to invite some of them to visit Kosovo in the summer for a better understanding of its history and values. Yllëza emphasizes the fact that Kosovo is a European project that is still a work in progress, considering EU’s involvement in supporting the new state on its path toward integration.

Upon completion of their studies, Yllëza and Besiana plan to work for Kosovo institutions such as the Ministry of European Integration and apply their knowledge of best European practices and policies.