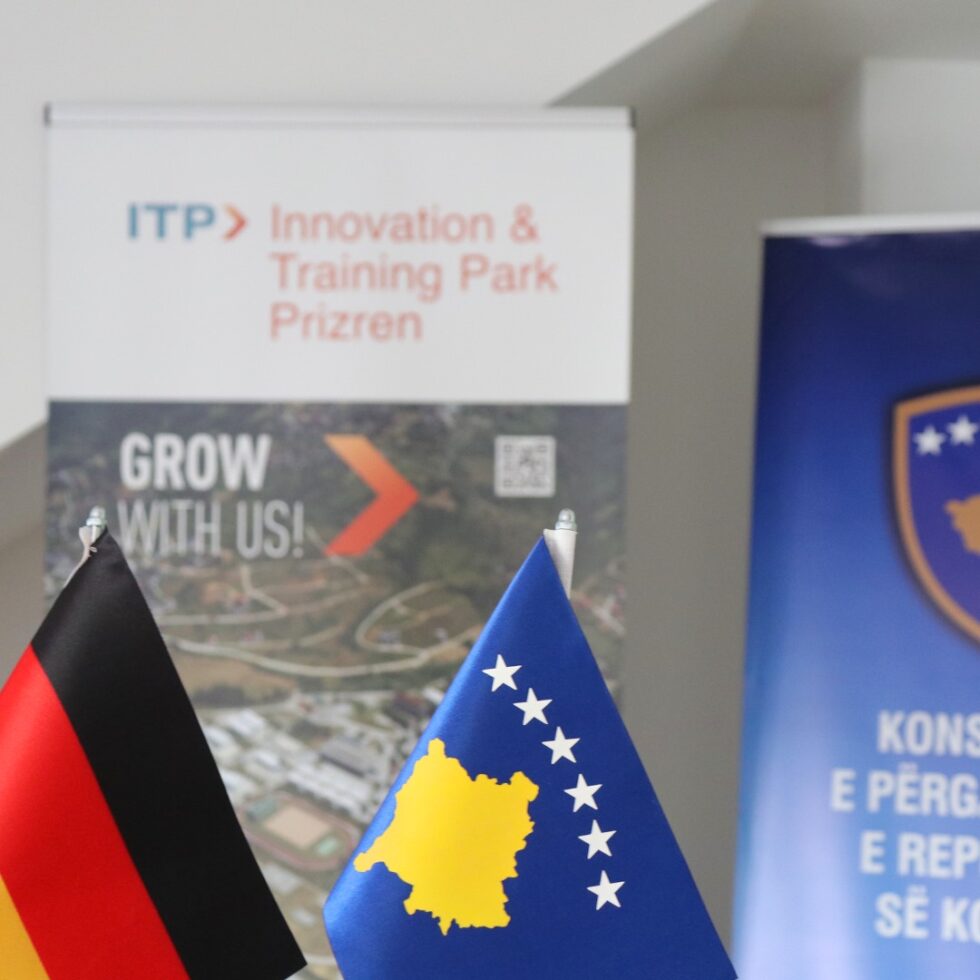 Innovation and Training Park Prizren meets the Diaspora in Düsseldorf

Integrating into the wider European economy is a key goal for Kosovo. With more than 500,000 1 people with roots in Kosovo in Germany, Austria and Switzerland, the diaspora can play a major role here as it connects economic power hubs in Europe with its homeland. To tap this huge potential for Foreign Direct Investments, transfer of knowledge and know-how, the team of the Innovation and Training Park Prizren (ITP) and the NGO Germin launched a roadshow to the DACH Countries (Germany, Austria, Switzerland) aimed at presenting the vision and potential of ITP Prizren as well as business and investment opportunities in the park. The first edition of the roadshow took place in Düsseldorf and welcomed 27 stakeholders from numerous businesses owned by the Kosovo diaspora in North Rhine-Westphalia, Germany.

The Innovation and Training Park (ITP) Prizren adds to Kosovo’s favourable business environment. It strives to be a focal point in the Balkan region for innovation, business as well as skills development, and a source of innovative and successful ideas. The German managed park offers a secure and stable investment environment for businesses, start-ups and training providers. It is currently developing into a changing and boosting element for ICT, agro-food and creative industries by creating and managing a friendly business environment. As the ITP Prizren proactively seeks Foreign Direct Investments as a nucleus for further economic growth and economic integration in Kosovo it has started a line of activities for this matter with a prime focus on diaspora entrepreneurs wishing to invest and become engaged in Kosovo.

As the Managing Director of ITP Prizren Mr. Wolfgang Leidig, pointed out in Düsseldorf, the strategically located park offers not just excellent German-build infrastructure, 52 buildings on around 40 hectares of land with plenty of vacant plots available for new structures, including fibre optic internet and clear ownership structures but also a chance to untap Kosovo’s favourable environment for business opportunities. Perks, among others, are a low corporate tax rate of just 10%, a pro-business stance and a young educated workforce. Likewise, the park will facilitate linkages and synergies between companies and education and training providers to offer investors the labour forces needed. The ITP’s development is financially supported by the German government. This shows the commitment and trust of Germany into the Innovation- and Training and furthermore helps to strengthen the ties between Prizren, Kosovo, Germany and the Albanian diaspora in Central Europe.

The resident Consul General of the Consulate of Kosovo in, Mr Kashtanajeva who co-hosted the meeting, welcomed the Roadshow of ITP hoping that such meetings will continue to happen, and help promote great initiatives similar to ITP Prizren. On this occasion Mrs Sihana Bejtullahu, Co-executive Director of Germin, stressed that diaspora plays a critical role in integrating Kosovo into the global economy. Also, participants present shared the excitement for the new era coming into the business environment of Kosovo. Mr. Bekim Bytytqi from the “Union Business Albanisch/Deutscher Unternehmen” said that the union of businesses in Germany has supported and will continue to support the ITP Prizren. The union members have already shown deep interest to invest in Kosovo and are looking forward to finding a way to become part of such a great initiative.

After the presentation of the ITP management, a Q&A was opened for stakeholders to understand the park better and clarify any thoughts after presenting the ITP Prizren concept. This was followed by a networking session that was a great opportunity to exchange with ITP representatives and get the detailed information regarding the park’s investment possibilities.

The end of the first informative meeting regarding the ITP Prizren was followed by a field visit to Kelmendi GmbH, a Kosovar family-owned business based in Germany with several branches across Europe. This tour was fruitful for both the ITP representatives and the Kelmendi company since it opened the door to discussing the possibility of collaboration/investments.

More segments of the roadshow will take the ITP management and Germin to successful diaspora entrepreneurs in a variety of cities in Germany, Austria and Switzerland. The interest in the ITP’s potential shown during the first event bodes well for the future!

For more information on the ITP please visit www.itp-prizren.com.