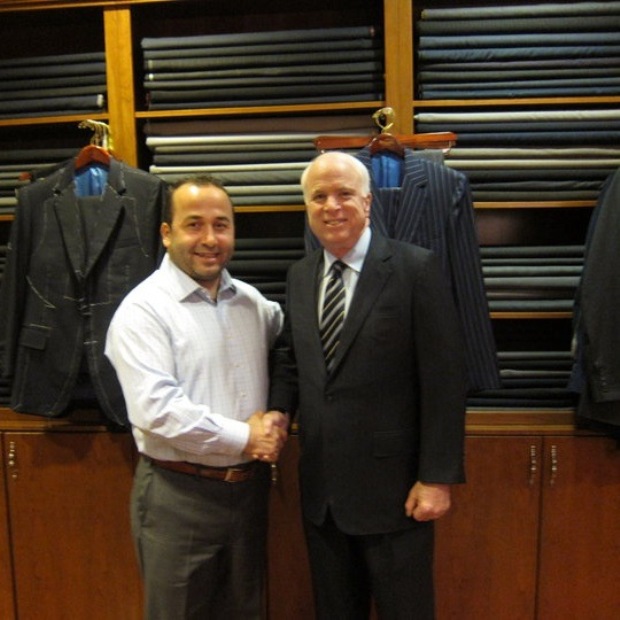 Bedair Jashari, the man who tailored away to the riches!

Mr. Jashari arrived in the United States in 1999 with a total of 20 dollars in his pocket. Now, among his clients are names of famous starts and athletes. Just like the thousands of dream-chasers, Mr. Jashari had come to the United States with the ambition of making use of his talent. His ambition and hard-work had finally paid off when he joined the “Bhambi’s”  tailoring house, a well known tailor shop among the elites of Manhattan.

Bedair Jashari had arrived in Brooklyn,NY on the year of 1999. With two children and a pregnant wife, Bedair had decided to take a good look at his last 20 dollars and make a decision. Had initially been hosted by his uncle, whom he constantly praises and is grateful for the help. Bedair had been taking all the possible jobs that he could handle, he had been working back to back shifts until his English finally caught up and enabled him to look for a more professional career.

“Initially, I was very eager to start working as a designer or tailor, however, my lack of English had made it nearly impossible for companies to even consider my applications. I had sent hundreds of applications, without an answer. Years later, I decided to give it another shot and here I am. Today I work as a classic suit designer and am very happy.”

” I am very thankful to God for the talent and ambition. Only through this talent have I made it here. My ambition was never personal, just like in the past, I constantly think of ways I could better my profession as well as help others” – explains Mr. Jashari.

The famous names among his customer are: former President Bill Clinton, Senator John McCain, Pierce Brosnan,Nicole Kidman, Hillary Duff, Calvin Klein, George Forman and many others. Mr. Jashari is convinced that attention to details and customer care are the keys to a successful business. “Attention to detail brings perfection in tailoring” M.Jashari.