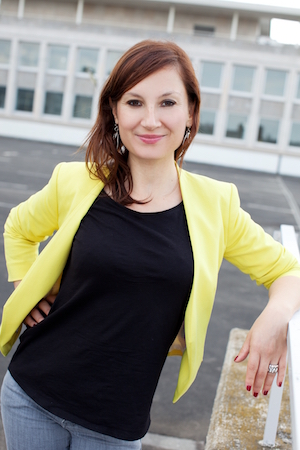 Arta Ramadani: Journalist and Author reflects on past, present and future

Arta Ramadani is an award-winning German TV journalist and author of Kosovar descent. Ramadani spent her childhood in Prishtina and later grew up in Germany. She has now found herself in Mainz, currently working at Europe’s largest TV station ZDF. It doesn’t stop there. Ramadani is also the author of the young adult book, “The journey to the first kiss: a Kosovar in Kreuzberg.”

The following is an exclusive interview with Ms. Ramadani for KosovoDiaspora:

KD: Tell us a bit about your background and the work you do.

AR: I grew up in Mannheim, a city with a large immigrant population. This means that you live with Italians, Portuguese, Turks, Greeks, and Germans. My childhood friends are from countries all over the world. I’ve always loved that. This way I learned to respect other religions and cultures from a young age. My family is open minded and loving.

Education was always important to my parents. Being independent. Getting ahead. Having dreams and fighting for them in an honest way. This is what my parents taught me at home. I’m very grateful for this, as it can’t be taken for granted. I love my parents, my brother, and sister. I owe them so much.

I always wanted to tell stories. When I was a teenager, I acted in a lot of plays because I was thinking of becoming an actress. But when I was 17 I became interested in radio journalism. I had my own radio shows for two years. In that way, I have improved my pocket money. When I was a student, I became more and more interested in serious journalism. I wanted to tell true stories about the people we live with. I did a lot of internships in television and independent production companies to gain experience. I moved often and lived in different cities. With all this and my academic degree under my belt, I applied to the ZDF, where I am still working today.

I’ve worked at ZDF for 9 years now. I mainly am a reporter for our morning-show “Volle Kanne.” I love our TV-Show. We are a creative band, very close to the spectators. We report on everything, our show is very popular in Germany. I love my job. It is exciting every day.

I get to meet many interesting and important people when I film my pieces, from whom I learn a lot. The topics vary quite a bit. Sometimes it will be on discrimination, sometimes mental illness or sometimes I’ll meet girls from traditional patriarchal societies, controlled and oppressed by their parents. Unfortunately, the topics can be tough to deal with. Some topics affect me deeply — make me sad, but objective and honest coverage is always my job. That’s what they pay me to do. 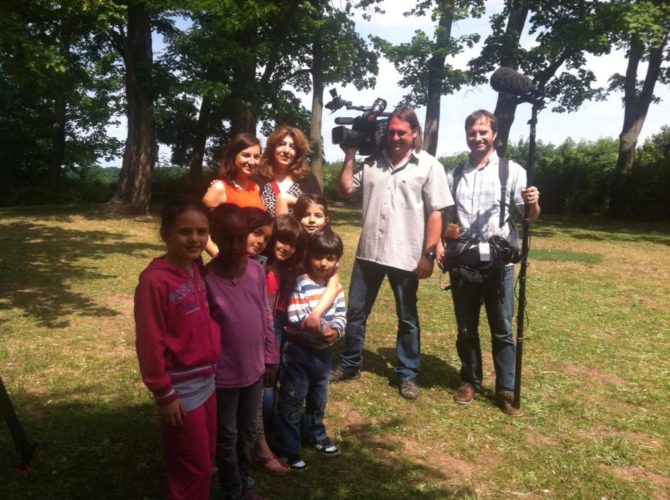 KD: What has been your favorite experience as a journalist?

AR: I interview many interesting and important people. But I have to say, my meeting with Dua Lipa was a very special one for me. I immediately took her into my heart.

She had a concert in Frankfort in 2016, at the very beginning of her career. I had heard her song “Be The One” on the radio and was absolutely taken by her voice. So I arranged to meet her for our morning show.

I knew nothing about her until I started researching. I found that she has Albanian parents and that she lived in Prishtina for a few years. I was so surprised and happy, that I greeted her in Albanian during the interview. She was my first interview partner in Germany to have Albanian parents. For me, that was something special because I rarely meet people with Albanian background in my job.

Now, Dua Lipa is a star. When I hear her songs on the radio today, I smile every time because I know how cute, smart, funny, charming and warm Dua is. I wish her the absolute best.

AR: At the moment I am preparing the shooting on the topic: “Double Life.” It’s about a girl from Kosovo who was born and raised in Germany. She is 22 years old and must lie to her parents to live the life as she wants. For example, she cannot have a German boyfriend or sex before marriage, nor can she move out without being married. So many girls in Germany have a life exactly like hers. Girls from Iran, Iraq, Greece, and Russia have parents that come from traditional patriarchal societies.

It is very sad that there are still many girls from Kosovo who are not allowed to lead a self-determined life. Only clarification helps. We need to talk about it. Taboos need to be broken not only in Kosovo but also in the diaspora communities around the world.

KD: You made the leap into a new media genre! In March 2018 you released your first young adult novel. The book is called “The journey to the first kiss. A Kosovar in Kreuzberg.” What is this book about? How did you come to the decision to process this story as a novel and not as a television report or documentary? 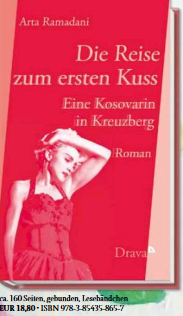 AR: I have already made reports about Kosovo. I kept an eye on it from a journalistic perspective and as a Kosovar, I am interested in the social and political developments there. But as much as I love my work in television, I wanted to create something very special with the novel. Writing, inventing stories… that’s something that is easy for me. I don’t need much for that… there is only me, my PC, my thoughts and a cup of tea. No cameras, no long train rides, no hotel rooms, no time pressure. There are no borders. I can give free rein to my imagination. I think that’s great because I have a lot of ideas in my head.

So I started writing about Era, a girl who lives in Prishtina in the 90s who really wants to go to a Madonna concert. The 90s were a difficult time for the Albanians in Kosovo. They were discriminated against and oppressed everywhere. They lost their jobs and were even persecuted and killed. Era’s parents are political activists who campaign for the freedom of the Albanians. They love their daughter very much, so they protect her by only telling her half-truths.

Era is awake, so to speak. She suspects a lot but does not really know what’s going on. So she flees her world with Madonna’s songs. Madonna’s music saves her. One day the family has to flee to Berlin. There, a Madonna concert is not so far away…

My book is a declaration of love to my parents, but also to Madonna and Germany.  This is a book for all Albanian parents who raised their daughters freely and lovingly.

KD: Do you process your own story in the novel?

AR: “The journey to the first kiss” is a novel – a fictitious story. But of course, it also has a lot of my own experiences. I spent my childhood in Prishtina too. My father was also in political detention for campaigning for democracy and human rights in Kosovo. In my youth Madonna, Michael Jackson, Take That, New Kids on the Block and the Spice Girls played a big role. Music shaped my life as a teen very much. So, my protagonist Era and I already have some basic data in common. Nonetheless, the book is not an autobiography.

KD: Germany is considered a rich country in Kosovo. Your protagonist is learning in Kosovo that there were also wars in Germany and that people were persecuted there as well. Why did you make life so difficult for Era?

AR: Eras’s family, who are Sunni Muslim, saved Jews during the Second World War. This is historically proven, which many in Germany don’t know. Many Albanians in Kosovo, but also in Albania –Christians and Muslims– have saved Jews. This has nothing to do with Islam, but with the code of honor of Albanians.

Era learns about it from her grandmother. So Era develops an idea of Germany as a country that does not welcome all people. She flees Kosovo with many prejudices in her mind about Berlin. Her mother had to laboriously convince her to flee in the first place.

I did not want to make Era’s life difficult but I wanted to show her that people in Kosovo are not the only ones that have experienced suffering, misfortune, and death. Many others have experienced much worse things. What happens in Kosovo is not an isolated case and Era learns that relatively early.

KD: What would advise would you like to give young women, especially those from Kosovo?

AR:  I can only advise every young woman to have a solid education and to be financially independent. Financial independence, for me, is the key to a self-determined and free life. So girls, stay faithful, earn your own money, believe in yourself, never let yourself down, don’t spend time with idiots, go through life curiously and openly and meet all people on equal terms. This is something that really matters in a woman’s life.