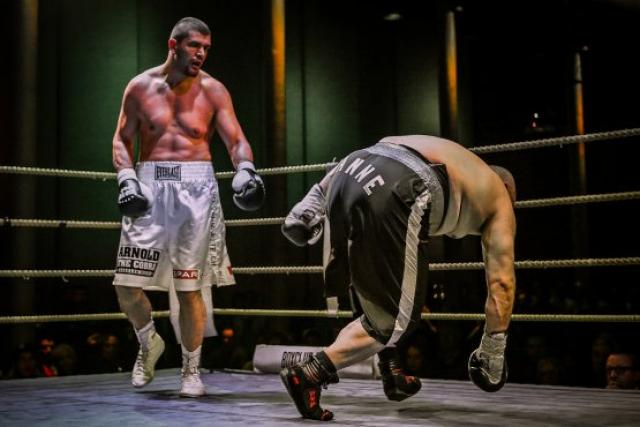 Arnold Gjergjaj: A tough guy – but only in the boxing ring!

Arnold Gjergjaj, also known as The Cobra, is considered the best boxer in the heavy weight category. He won all of his 24 matches! (18 through KO).

Arnold practices every day in order to be up to speed for 12 rounds. Aside from this, he is physically strong by nature. He got the nickname Cobra from his trainer when he qualified to be a professional boxer. At the beginning Arnold did not like his nickname because he is afraid of snakes. However, his trainer convinced Arnold that that’s the most suitable nickname for him because Arnold is a fighter whose hit leaves his opponent with repercussions. Arnold now enjoys his name immensely after he took some time to get used to it.

Arnold Gjergjaj has always enjoyed boxing. He remembers that he left Kosovo in July 1999 to go live in Switzerland. Three months after this even, Arnold began kickboxing. After seven fights in kickboxing Arnold decided to only do boxing. He won multiple fights as an amateur boxer and gained the status of a professional boxer through his hard work. He gained this status for years ago and won 24 matches since then, remaining undefeated.

Arnold enjoys the attention of both countries, Kosovo and Switzerland. The Swiss media regularly reports on his success and Albanians show up at his matches in big numbers. To him, it is important that all Albanians abroad serve as ambassadors and show respect and thankfulness to their host countries, as these countries offer them numerous possibilities to move forward. When Arnold spends time with his friends and family he is very calm and sociable which is very much unlike his in-the-ring personality. During his family time, he prefers not to talk about boxing but rather likes to discuss other topics.

Arnold’s dream is to fight against Vladimir Klitshko. He is working hard on increasing his chances to win in a fight with Vladimir. Arnold’s overall goal is to win the world championship and he aims at achieving this in two to three years.