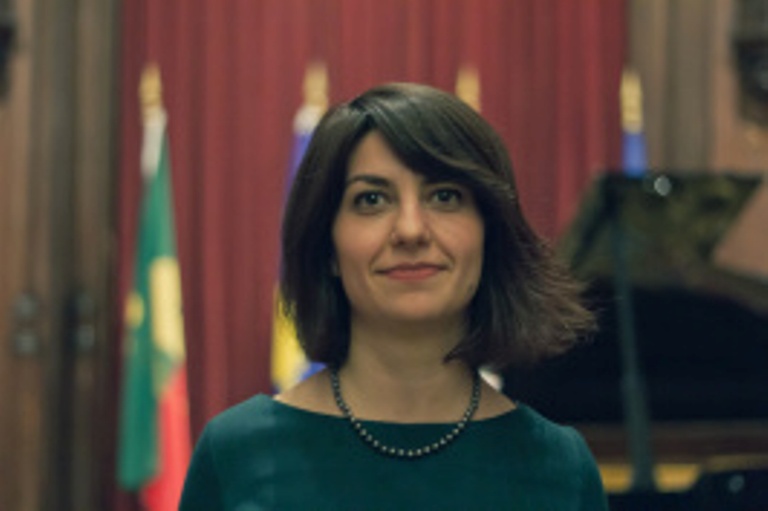 Based at the at the Leiden University, Arlinda Rrustemi is studying international law, working with the former NATO Secretary General, and bringing local perspectives on statebuilding in Kosovo.

Arlinda Rrustemi was born in Prishtinë (1988), Kosova’s capital city. She currently resides in the Netherlands. Arlinda is a lecturer and researcher at the Grotius Centre for International Legal Studies, of Leiden University. Furthermore, she is a research assistant to Professor Jaap de Hoop Scheffer (the former NATO Secretary General) at the same university. There, she is involved in courses taught at the Advanced LL.M. Programme, in Public International Law, and at Leiden University College as well. Arlinda holds a B.A. degree (cum laude) in Law and International Relations, from the Roosevelt Academy in Utrecht, and obtained an LL.M. degree in Public International Law from Utrecht University. Her thesis was entitled: “Accountability of International Organizations and Remedial Actions in the Republic of Kosovo”.

Arlinda is momentarily pursuing a doctoral degree, in the interdisciplinary research of law and politics called “State-Building through Life Stories: Incorporating Local Perspectives”, as supported by the Netherlands Organization for Scientific Research (NWO). In ther PhD project, Arlinda is seeking to enhance the understanding of international state building and its relation to the politics of capacity building and the local ownership, which are frequently characterized as the only concept merging national governments and international organizations in handling post conflict situations. In 2012, Arlinda was awarded, the prestigious NWO ‘Mosaic subsidy’. Award winners receive 200.000 Euro, to carry out Ph.D. research over a period of four years.

Arlinda has already acquired extensive working experience, at this early stage of her life, in a variety of fields. She has, inter alia, worked as a assistant at the Youth Initiative for Human Rights (YIHR) in Kosova; as a legal intern, at the International Tribunal for the former Yugoslavia (ICTY, in The Hague), and as external relations intern, at the International Criminal Court (ICC, in The Hague). Her list of internships also include: legal intern, at the Kosovo Supreme Court; legal/international affairs intern, at the Kosovar Ministry of Foreign Affairs, and international affairs intern, at the Kosovar Prime Minister’s Office. Other posts regard: cultural assistant, at the Kosova Academic Centre; project assistant, at the Balkan Initiative for Reconstruction and Development; director, at Prishtinë’s Youth Centre; board member and regional coordinator, of the Kosova Youth Network, while Arlinda is also active in the field of non-governmental affairs, through Kosovo Institute for Advanced Studies, which offers a platform for discussing various state building processes.Their mission is also to initiate social activism, through critical thinking, while their research and activities seeks to actively encourage professionalism; integrity, and overcome political apathy.

In addition to that, Arlinda’s personal research interests concern: post-conflict state building; the accountability of international organizations; international relations, and diplomacy. Arlinda has published, for example, on the ICC (“The ICC’s First Decade: the Role of the Netherlands and Canada in the First Permanent International Criminal Court”, in: C. Steenman Marcusse and C. Verduijn (eds.) “Tulips and Maple Leaves in 2010: Perspectives on 65 years of Dutch-Canadian Relations”(Barkhuis, Groningen).