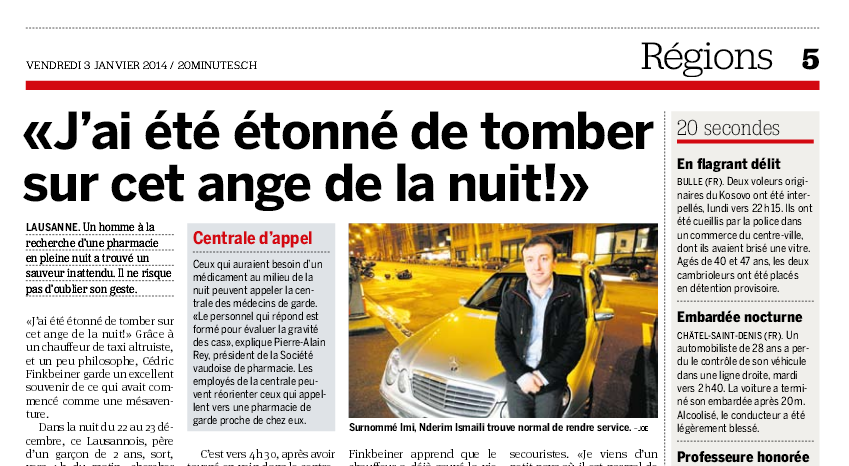 The Kosovar WonderTaxi in Switzerland

A native of Kosovo has been turned into a local hero due to his humanism towards all the people that he comes into touch with. For his good will, Nderim Ismaili has made it to the front page of the Swiss based magazine “20 minutes.”

Nderim Ismaili, father of two daughters, has been working as a taxi driver in Lausanne ever since 2007. However, it is not the the years and miles passed that make his credentials of a wonder taxi driver, it is mostly up to his generosity that he is well known among the people.

Being modest, Mr. Ismaili tends to brush off the many compliments he receives, however the Swiss public know him for three very important cases. The first case starts at an early morning at around 4:30 where a professor is in need of immediate access to medication that would stop his 2 year old’s bleeding. Mr.Ismaili had not only driven the professor to long distances to find an open pharmacy, he had decided to take the professor to his house and borrow medication from his own after realizing that all the pharmacies are closed. To top off his generosity, Mr. Ismaili did not accept any payment, he only asked for the professor to do the same to other people in need.

Mr. Ismaili has many positive rumors surrounding him. Midst telling his story, the professor was interrupted by a bystander who claimed that the same taxi driver had helped her in multiple occasions. Furthermore, another great case describes Mr.Ismaili as a true movie like hero. During his routine drives downtown, he had spotted a woman shaking on the side of the road. Being a former Pharmacy student at the university of Prishinta, Mr. Ismaili had concluded that the woman was lacking sugar, thus he rushed and gave her pieces of candy which in turn kept her awake until the ambulance came. The paramedics had told the woman that if it was not for Mr. Ismaili, she could have passed away from the attack.

However, just when you would think that the WonderDriver was through with his goodwill. Here comes another case that makes you question your approach to life. Mr. Ismaili does not end his good deeds within boundary reach. Upon hearing of a homeless family in Presheva, Mr. Ismaili had decided to personally finance the construction of a house. Thus giving the chance for the family to experience a good nights sleep under a safe roof.

While being modest and shy, Mr. Ismaili explains how his work and deeds are not intended to bring him fame or money, his only wish is to show the Swiss people the real value of Albanian culture.