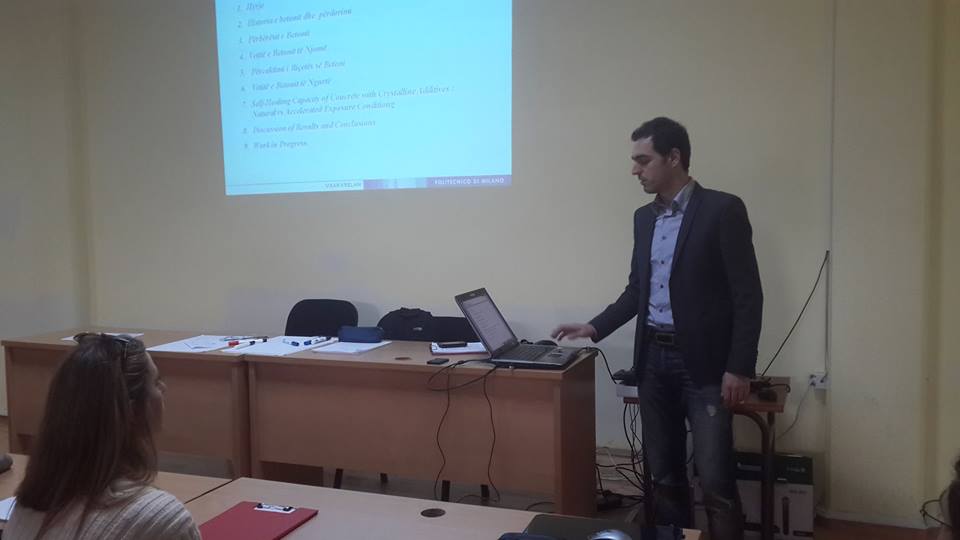 Visar Krelani, a Ph.D. candidate at the University Politecnico of Milan was born and raised in Gjakova, a city in Kosovo well-known for its cultural heritage.

Krelani, a graduate of the University of Prishtina’s Faculty of Civil Engineering, decided to study abroad to bring and implement the new methods, innovations and tools of standard and modern engineering in Kosovo. He was awarded a scholarship to pursue his graduate studies at the University of Perugia, Italy–the home of architecture and civil engineering.

Once he arrived in Italy, Krelani was not allowed to enroll immediately in a Masters program because his credits from the University of Prishtina were not recognized in Italy. He had to repeat the majority of his exams, but he graduated just two days after the announcement of the independence of Kosovo, giving him double reason to celebrate.

Krelani’s thesis in Italy redefined an old idea of projecting and calculating the Subway (underpass) between the area of Qyteza Pejton and the Central Building of KEK in Prishtina. This project was implemented later by the Municipality of Prishtina with some changes, but Krelani found satisfaction in having his academic vision implemented in reality, a small but significant contribution to his country.

Krelani completed his degree from the University of Perugia and is now a Ph.D. candidate there for Seismic and Geotechnical Structure. His research interests include studying concrete’s innate ability to self-mend and self-heal cracks.

As a part of his studies in Italy, Krelani also served as a visiting scholar for three months at the Federal University of Rio de Janeiro through the European program “Encore.” This experience provided not only the possibility to build a bridge between the University of Rio and Politecnico, but also between Brazil and Kosovo.

Krelani says, “Once I came back to Italy, a fellow from Brazil came to Italy as [an] exchange [student] and we [were] both were invit[ed to] Kosovo’s University of Business and Technology (UBT) to deliver a lecture related to the newest research in concrete.” He also represented the Politecnico of Milano in the International Conference in Gent, Belgium, discussing his work with self-healing materials. Krelani looks forward to eventually applying these new methods regarding the elaboration of concrete in Kosovo.

Krelani is optimistic for a bright future of young people like himself in Kosovo. He appeals to the universities to be more open, responsible and serious in the recruitment of academic staff and to take advantage of the young scholars who have been studying abroad as resources and assets toward the improvement of Kosovo.