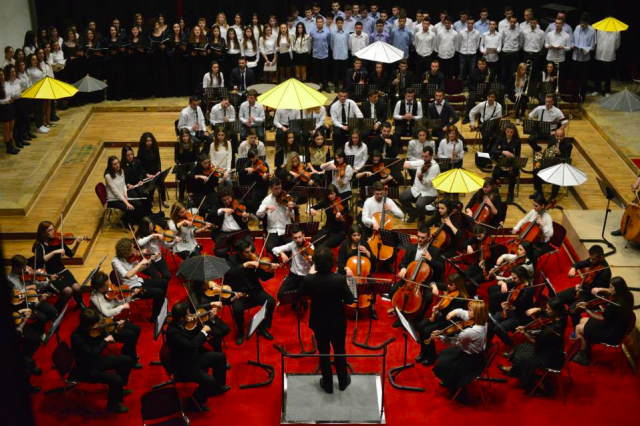 All of this is a special contribution of the leader of Basel Youth Orchestra “Birseck Schule”, Lukas Greiner. He is engaged not only with the instrumentalists of his orchestra but also with Kosovar instrumentalists.

“One of the biggest successes for us is the permanent cooperation with a youth orchestra from Dornach-Birseck Schule of Basel, Switzerland. Owing to leader of this orchestra, Mr. Lukas Greiner – who is the key person that is keeping alive our orchestra through humanitarian aid and permanent financing of our tours – we managed to realize a dream for Kosova’s youth. We sent 25 young instrumentalists for a two-week tour in Italy, together with their young colleagues from Basel”, noted for ‘albinfo.ch’ Kushtrim Gashi, the leader of Kosova Youth Orchestra.

After the April tour in Kosova,Mr. Lukas Greiner and his friends raised funds to take their 40 Kosovar colleagues to a tour abroad – in Basel, Switzerland. 5000 Swiss francs for 40 Kosovar musicians, assuring their flight to Switzerland, is the concrete aid from Swiss young musicians. However, the Kosova Youth Orchestra instrumentalists are not sure about their tour yet, because they have not managed to find donations for accommodation during the concert tour in Switzerland.

“I’ve asked for donations in Kosova, but as you can know, they refuse you with a lot of justifications. So we haven’t found any support here, unfortunately”, noted kapellmeister Gashi, disappointed, but hoping to get some help from Kosovar diaspora members in Switzerland.

If they manage to raise sufficient funds, young instrumentalists from Kosova will visit Basel Youth Orchestra, from October 31st to November 3rd or 4th of this year.

Kosova Youth Orchestra was established in 2009 and from its beginning it has greatly developed and had numerous successful concerts. So far, they have performed almost in all of the cities in Kosova, in some cities in Albania and lately in Italy as well.