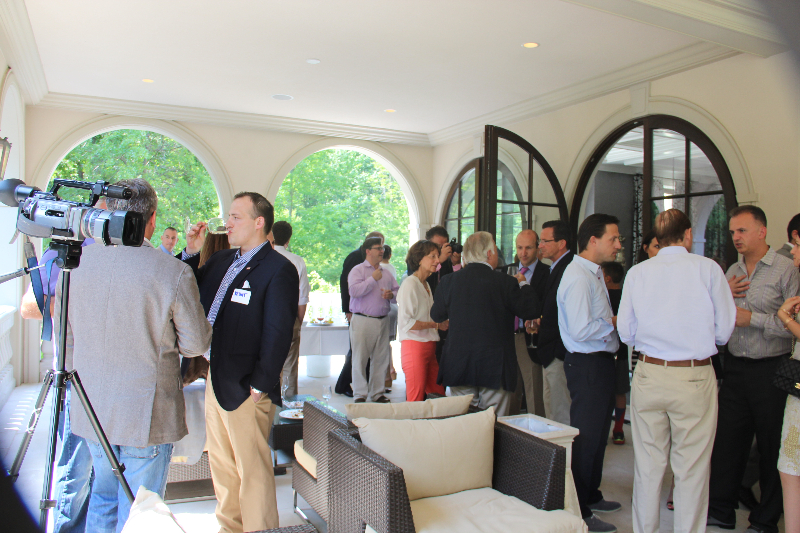 Last Sunday, the successful banker, public policy advocate and philanthropist Richard Lukaj, welcomed in his house high-profile figures in US politics and successful Albanians in America.

Congressman Himes completed a political heavyweight quartet in this fundraising event which included the Governor Dan Mallo, and US Senators Chris Murphy and Blumenthal, who took opportunity to learn more about the Albanian-American community in their state and beyond.

Mr. Lukaj has been a dedicated activist and an established leader in the Albanian-American community for more than two decades. He has organized many charitable events, including one to raise awareness for “Sentebale”, a foundation initiated by Prince Harry which helps the vulnerable children of Lesotho affected by the HIV/AIDS.

During the crisis in the Balkans, he was a tireless fundraiser for humanitarian aid for Kosovo, and for the children who were orphaned and displaced by the war.

Mr. Lukaj made the opening speech, in which he drew back from the journey of his own life, from birth in a refugee camp in Italy to parents escaping dictatorships and discrimination in Albania hoping to find a better life. “No one likes to raise funds for politicians, neither the candidates nor the donors, but we are here because each of us realizes that it matters who governs” continued Lukaj, stressing the importance of the event.

He then introduced Congressman Himes, who represents Connecticut’s 4th District in the United States House of Representatives where he is serving his third term. He is a member of both the House Committee on Financial Services and the House Permanent Select Committee on Intelligence.

US Senator Christopher S. Murphy was an early supporter of Kosova’s independence and of the efforts to establish peace, stability and democracy in the Balkans. “The Senator and his staff have been of great assistance to me during efforts to support our American University in Kosova”, said Lukaj as he introduced him.

Richard Blumenthal is well known for his “unprecedented five terms as Connecticut’s Attorney General, fighting for people against large and powerful special interests” host described him. He is a great advocate of immigration issues and reform in the Senate.

Governor Daniel Malloy is known in the community from the days when he was Mayor of Stamford, a city that has become home to a growing number of Albanian-Americans. “I dare call him a friend and welcomed guest at our home on many occasions”, Lukaj said of the governor.

Mr. Lukaj thanked the activists, donors, entrepreneurs, attorneys, the media and all the associates who helped him organize and run the event.

After the ceremony, there was a cocktail followed by a well-rehearsed performance by Ergin Brahimi and his musical ensemble.