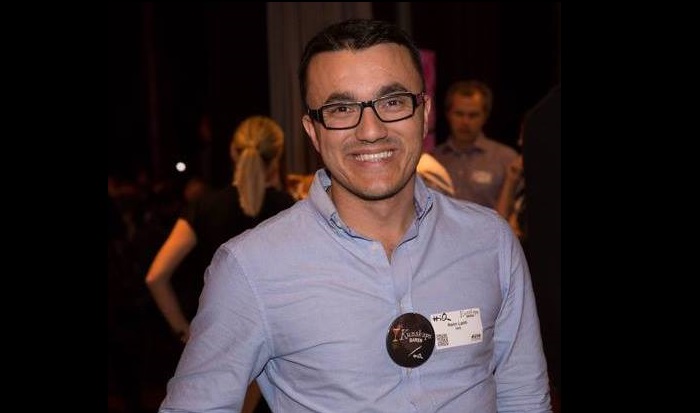 This story began with a dream of a Kosovar boy of studying abroad in the USA. As a high school student in Prishtina, Naim had read of an American Library in Kosovo and opportunities offered to learn English. Naim marched determined to learn the English language, and so he did. Three years later and piles of English literature books read, he finally gathered the courage to apply for admission to US universities. Naim was offered a scholarship and a spot at a university in Philadelphia. However, unable to cover the rest of the costs, he had to turn down the offer.

Naim is not a quitter. He wrote to the admission office of Växjö University in Sweden and he was offered the Erasmus Mundus scholarship, which covered all the costs. He was one of the 400 students from around the world that got the opportunity to study there. It was a dream come true. However, no dream comes without sacrifice. Naim explains for Expressen one of his most difficult moments: “It was difficult to leave the family. I saw my dad cry for the first time at the airport. It was not easy to come to a foreign country and meet a different culture and not know the language. It took me two years to finally merge in the new culture.”

Once in Sweden, Naim started to apply for jobs so he could cover his living expenses. He started working as a student mentor with the Mentoring Project Näktergalen and then later on became an actor at the police academy in Växjö. At some point, he also worked as a dishwasher at a restaurant. This was an excellent opportunity for him to learn the Swedish language. Naim says that he was very proud of himself when people would finally understand him fully.

Naim hadn’t planned to stay in Sweden but as time passed by, he started to enjoy the country more and more. He had now reached his goal; he finished his studies. Naim decided to go a little further and explore opportunities in Sweden. Soon, he got a job in Stockholm. Naim took his belongings and was headed to a relative’s place, where he was going to stay temporarily. While at a coffee shop on a random day, Naim was greeted by a stranger who had asked if he could sit down next to him and charge his laptop. The well-dressed man had inquired upon Naim’s career and life outlook; it turns out that Naim had applied for a job at this stranger’s company and that they had been in contact through email. Naim had finally found a stable job and a place to stay, thanks to that lucky encounter. To this day, Naim is in touch with the ‘stranger from the coffee shop’ who is now a close friend of his.

After that experience, Latifi always talks to people with suitcases he meets at coffee shops and does not hesitate to offer them a place to stay. Naim Latifi currently works at HiQ, one of Sweden’s biggest IT-consultant companies.