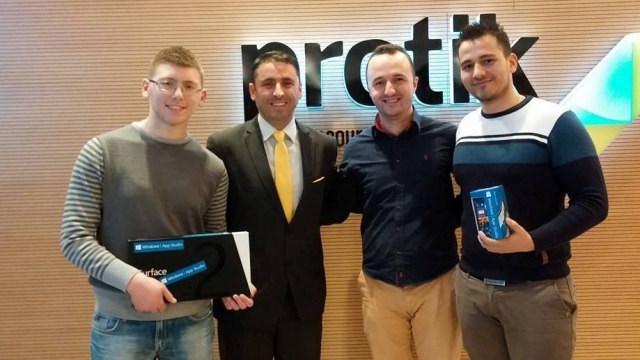 Online Albanian platform ALMOOC which promotes the scientific education of Albanians, in cooperation with the current leader in information technology (IT), Microsoft, award application programmers working on the Windows Phone operating system (OS).

Almost two months prior, the platform for scientific education ALMOOC, in cooperation with the IT giant MICROSOFT Windows App Studio announced the competition “The Best of Almooc” with the slogan “learning has never been more fun”. The intention of this competition was to engage budding Albanian programmers to build apps (applications) for the Windows Phone OS.

This competition managed to incite a lot of interest in the technologically-passionate in Albania as well as in Kosovo. The number of participants was in the highs of 1000, showing the growth of the competitive spirit in Albanians for such international competitions, but at the same time it shows the amount of Albanian interest in programming in general. This was exactly the reason why Windows App Studio signed a contract with ALMOOC in order to engage Albanian talent in building apps for smart tools working with the Windows Phone OS.

The jury under the lead of the head of Microsoft Windows App Studio Mr. Bryan Tomlinson, selected over 200 apps which were rigorously tested and filtered, finally publishing the list of 20 apps which were presented to the mass audience in the final ceremony. The handing out of the awards happened in an unorthodox e-ceremony, powered by the IT platform which the participants had access to while their projects were being tested in real-time.

The sponsors of the Windows App Studio event coordinated with Microsoft Albania in handing out four tablets in the first category, three of the award-winners being competitors from Prishtina and one from Tirana. In the second category, four Nokia Lumia smartphones were awarded, while in the third category, four certificates of gratitude were handed out for the third-category winners.

Jury member Steven Yee was stunned by the produced work and he remarked that the awards were purely symbolic in comparison to the quality, creativity and functionality of the products which the Albanian participants offered in this remarkable competition. On top of this, the competition proved the competence and professionalism of the participants, which shows the overall high level of ability of Albanian IT programmers.

The organizers ended the ceremony by declaring that this was only the beginning of cooperation with Microsoft, and that projects of this nature will continue, not least due to the continuity which the ALMOOC platform ensures with Microsoft in the near future.