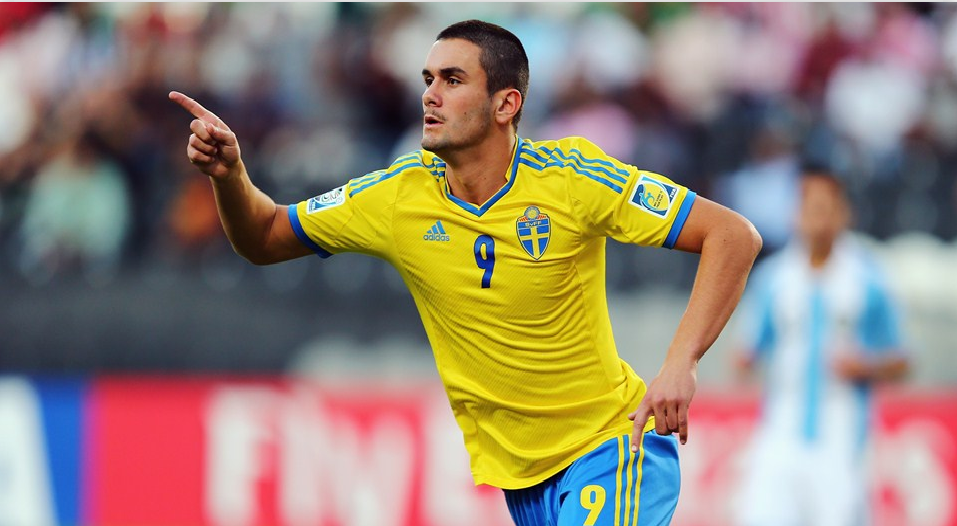 Meet Valmir Berisha, they call him ‘the new Zlatan’

It has been a great year for 17-year-old Swedish born Valmir Berisha, a young football star whose fame has expanded so much more in the past couple of weeks. His last name may be common amongst Albanians, but this Kosovo-Albanian kid, who has roots in a small village in the Deçan municipality, stands out. Just like his idol, a certain Mr. Zlatan Ibrahimovic, this youngster has been a very important piece of the Swedish puzzle.

Berisha was first called up by the Albanian U19 team last year but had to turn them down due to an injury. When he got better Sweden called him up for the annual camp that they were Swedish National Youth Team coaches try to find new talents and since he impressed coaches so much they decided to bring him in to their U17-team.

The journey started earlier this spring when his equalizing goal in the Elite Round gave Sweden’s U17 team a ticket to the U17 World Cup that was held in the United Arab Emirates this fall. This was actually the first time a Swedish team participated in U17 World Cup, and they had Berisha to thank. Before the World Cup, the Swedish U17 team played in the Euro Cup but it did not go as well as hoped for. Berisha received a serious head injury during one of the games but continued to show us the warrior he is by returning to the team very quickly.  However, the Swedes weren’t that lucky; they made it to the semifinals but lost against Russia after a penalty shoot-out (though Berisha did score one of the penalty goals).

But this was not the end for Sweden – they had a World Cup to prepare for!

Last month Sweden’s U17 took a long  flight to the United Arab Emirates with their young Kosovo-Albanian duo Berisha and Gentrit Citaku, a midfielder from the Swedish team IFK Norrköping. Sweden ended up in the same group as Iraq, Mexico and three time WC champions, Nigeria. Sweden began the tournament with a 4-1 win against Iraq without any goals from the Kosovo-Albanians, but we didn’t have to wait long to see one of them score.  In the second game against Nigeria, the game ended 3-3, with Berisha scoring two goals only eight minutes apart, though the two teams split the points. In the final group stage game Sweden lost to Mexico but was able to go through to the 8th final as the best group of three, which meant Japan would be the next contender.

In the 8th final against Japan, Berisha scored the first goal after 11 minutes and Sweden won 2-1. The next phase was the quarterfinals, and this time Sweden was playing against Honduras. Though Honduras scored the first goal in the 68th minute, Sweden was able to equalize only a few minutes later thanks to Citaku’s assist. Sweden was fighting for survival and at the end Berisha once again came to the rescue, scoring the final goal for another 2-1 win for Sweden – and what a goal it was! A Zlatan Ibrahimovic-like goal with his heel, talk of the goal soon spread all over the world and was even nominated as “Goal of the Year” in the Swedish Football Award.

Afterwards, Sweden prepared for the semifinal in which they faced Nigeria once again, the team that Berisha had scored twice against, but this time Sweden was unable to score. Nigeria’s 3-0 win in front of legend Diego Maradona, who watched the game from the bleachers, took them to the finals. Sweden on the other hand had a third place final to play against Argentina in which young Berisha showed what he was capable of by scoring a hattrick! Sweden won 4-1 and Berisha was later awarded with the Golden Boot Award as the top goal scorer with his 7 goals, a prize he received from FIFA president Joseph Blatter himself.

Even though Berisha’s goal against Honduras did not win the Swedish Football Award, he got to give away the award to the winner, who happened to be his idol, Zlatan Ibrahimovic himself.

Whereas earlier in his career Berisha has been on trial with the Scottish team Celtic, now teams in both Sweden and all around Europe are lining up to get his signature. We’re all excited to see where this current Halmstad BK player will end up next.

After all, you’ll want to remember this guy: they call him ”the new Zlatan.”