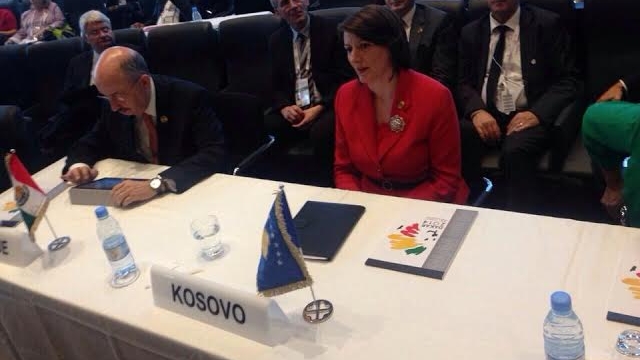 Kosovo at the International Organization of La Francophonie

The organization of La Francophonie is an international association of countries with great influence of the French language, cuisine and culture. The organization comprises of 57 member states and governments, three associate members and twenty observers. La Francophonie has been founded in 1970 and stands strongly behind its motto of égalité, complémentarité, solidarité (“equality, complementarity, and solidarity”).

Kosovo has recently joined with the status of an observer through an event held in the Republic of Senegal. The Organization of La Francophonie held a ceremonial event hosting Kosovo, Costa Rica and Mexico as its newest members. To honour the event, Kosovo was represented by its president Mrs. Atifete Jahjaga and the Minister of Foreign Affairs Mr. Enver Hoxhaj.

Mrs. Atifete Jahjaga addressed the panel of countries in her speech by thanking the members. “I would like to first thank each and every country in the Organization of La Francophonie, also the president of Senegal for hosting such an important event. By including Kosovo in your organization, you have once again given strong evidence and support to dialogue and partnership as the only way to true peaceful stability”.

This is an important mark within the cultural history of young Kosovo, for it highlights the country’s ambition and vision for an equal and solidarity based society. Through La Francophonie, Kosovo seeks to network with the rest of the world in search of greater cultural cooperation.