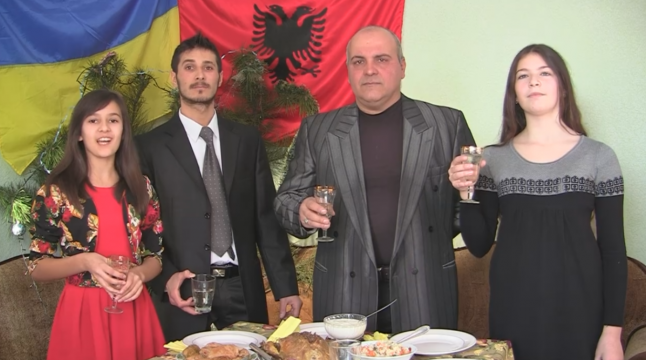 There is an old Albanian Diaspora minority living in Ukraine. Displaced from Korca and Pogradec 500 years ago as a result of Ottoman persecution, these small communities consist of Albanian families from Macedonia, Bulgaria and Romania. The small colonies were placed throughout four villages in the south of Ukraine: Karakurt, Devneskoje, Gjeorgjevka, and Gamovra. Albert Voka, a Kosovar scholar, alongside his Russian colleague Alexander Novik, have researched the history of this community. Their research claims that about 5,000 residents of these villages identify themselves as Albanians. The language spoken is a mixture of Russian and Tosk-Albanian, while customs, folklore and dresses are those easily identifiable rooting back to Albania.

Migratory patterns indicate lines of families migrating to the Azov Sea region, about 10 km from its coast, thus founding 3 villages, Devnenskoje, GJeorgjevka, Gamovra, in which Albanians still live. Today, Karakurti colony has about 2,700 residents and 80 percent of them are of Albanian origin. In 1911, the great Fan Noli visited Odesan and met with members of the Albanian community through a church gathering. Likewise, in 1979, Fr Liolini, chancellor of the Albanian Orthodox Church of Boston, focused his attention on this community and the importance of their preserving Albanian heritage.

Sadly, apart from these two highlighted events, very little has been written and very little has been done for this Albanian community. 2006 indicates a renewal of interest – the League of Albanians in the World Association had taken the initiative for documenting the daily life of this Albanian community in Ukraine. Sunrise Jamal, was an envoy during a visit in Odessa, and was surprised by the fanaticism with which the Albanians preserved the old language and customs. “By studying the early displacement of Albanian population, indications led me and the ‘League of Albanians in the World’ to go to Ukraine and document this community” claims Mr. Jamal. This documentation highlighted the necessity of government intervention in order for the Albanian identity  to sustain in Ukraine. Furthermore, this initiative aimed to create feasible conditions to inherit the national language and culture, as has been done over generations.

Following this documentation, the inhabitants of the Albanian community in Ukraine sent a petition to the then Minister of Education, Genc Pollo, and the Minister of Culture, Ylli Pango, in which state action was required for the exchange of cultures. The following three main points have been requiring immediate attention during that period: 1. Teaching the Albanian language (sending  Albanian literature books, dictionaries and teachers), 2. Repairing the House of Culture, and 3. Reconstructing the village’s church.

The legacy of the Odessa Albanians have retained the customs of their ancestors. Such a fact is easily verified upon entering at the houses of the families who live there, in wedding ceremonies, in decorative handmade works with wood, etc. The houses of the Odessa Albanians were originally built of baked clay and decorated with carved stone. Their houses are still characterized by the small rooms’ lounges and the typical large chambers build to honor guests. The archives of the House of Culture preserve a large number of old photographs and costumes living for 195 years.

All in all, the small dispersed communities of Albanians living abroad continue to baffle and provide a great source of research for many Albanian culture enthusiasts worldwide.

The original article was published in Gazeta Dita: http://bit.ly/1xQEoZ9.