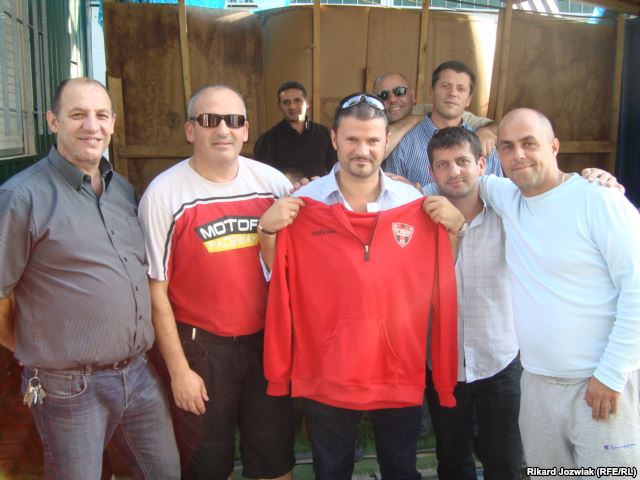 Five minutes into the second half of the match, the deadlock is broken after a blistering counterattack capped by a delightful lob over the onrushing goalkeeper.

Suddenly, the floodgates open and the home team doubles its lead within a couple of minutes. In the final stages of the match, it’s 3-0 for the hosts after a bucket-load of gilt-edged chances. The table-toppers, RC Sartois, have lost their 100% winning record and their place at the top of Brussels regional third division at the expense of FC Kosova Schaerbeek.

It might be just an amateur soccer club, playing six divisions below the national Belgian Premier League, but don’t tell that to the fans of FC Kosova. For them, it is a lot more than just a sports team. It is part of their identity, a second family. Fans point out that the club existed long before Kosovo itself gained broad international recognition as a country and opened an embassy in Brussels.

There are almost 200 fans watching the match — a remarkable number if one considers that there are plenty of better soccer clubs in the city. But there is more to FC Kosova than just the standard of football.

“Firstly, we are part of the Muslim community of Brussels,” says Avni Bakalli, one of the club’s fans. “And it represents everything that Albanians want from a football club: discipline, the will to win, brotherhood, and, in particular, mutual trust.”

“We have suffered a lot in history but now we have a club among us where we meet with friends, grab a drink, talk about everything and nothing, but primarily about football,” says another fan, whose son, nephew and cousin play for the club.

The president of FC Kosova, Abazi Xhevat, was a player when the club was created 20 years ago. He believes that there would be even more people watching if they had a proper stadium.

The team is currently confined to playing their home games at a fenced-in AstroTurf pitch in the gritty, multiethnic Brussels municipality of Schaerbeek, where a majority of the city’s 40,000 ethnic Albanians live. Previously, the team shared a rundown arena with two other neighboring clubs but they all had to move out due to construction work.

When Xhevat was still a player, the club consisted of a senior team full of immigrants from Kosovo at the very bottom of the football league system in Belgium. Today, it has already climbed up a division and is topping another table.  What’s more, FC Kosova now has 140 players and a team at each underage-level from ages 6 to 21. The club’s secretary, Afrim Kas, tells RFE/RL that the club is now becoming much more multiethnic with players from Turkey, Morocco, and several African countries, both in the senior squad and at youth level. “In the beginning when the club was created it was a nice little family club that represented the Albanian community,” he says. “But it has developed a little bit into a club for the whole of Brussels and in the surrounding region of Brabant.” Most of the senior team’s starting 11, however, still hail from Kosovo, but on the bench orders are barked in French. The coach of the team is Christophe Schoenjans, an ethnic Belgian who was the club’s senior goalkeeper for five years before an injury forced him to hang up his gloves. Even though the team still has a strong ethnic identity, Schoenjans sees no difficulty as an outsider coming in to give instructions. “They are not Kosovars, they are players,” he says. “For me they are players and it doesn’t really matter if they are Kosovars, Spaniards, Belgians, or Swedes. It is the same thing.”

A Vehicle For Integration

Yet, the pride of putting on the red and black shirt with the Albanian double-headed eagle emblazoned on their chests is obvious for most of the players. Club captain Ledio Kertusha maintains that he is playing for his country and his people, but he points out that FC Kosova Schaerbeek is also an important vehicle for integration in Belgium. “It is good for us because it will integrate us even more and do so in a better way,” he says. “And it will show everyone that we have a place in this society.” The team still plays a distinctly Balkan style of soccer characterized by a fondness for silky skills such as backheels, step-overs, flicks, and nutmegs mixed with fiery temperaments, angry gestures toward the referee, and the occasional theatrical simulation near the opponent’s penalty area. Kas believes that the club’s credo is to play entertaining football and for the players, both old and young, to have fun. “It’s a spectacle,” he says. “The kids who come here want to entertain themselves. That is the most important thing for the club: the entertainment. When they join the club, it’s because they want to have fun.”

The relative success of the club does pose some problems, however. The annual budget of 4,000 euros ($5,500) is still small but will certainly grow if the club continues to climb up the league tables. The players don’t get salaries and the people who run FC Kosova still do it as a hobby. But referees need to be paid and using the pitch for so many youth teams is not cheap. So far, sponsorship from local businesses, membership fees, and a small entry fee to watch the home games allow the club make ends meet. But Xhevat hopes that the municipal authorities can help out financially as well so that all three teams in Schaerbeek can play on real football pitches with better facilities.
“It is not a one-year project but one that takes a longer time,” he says. “We will continue to work with our youth teams but will also strive to improve the first team at the same time. Not everything depends on us, however. We need support from the municipality when it comes to issues such as infrastructure and finance. All that is still needed, but we have the talent already.” A new, temporary pitch has already been found in another part of Schaerbeek where a statue of Skanderbeg, the 15th-century Albanian national hero, will overlook the action.
Maybe he will see the club continue its march up the soccer league. Fans are hopeful that the club will not only export players to the highest division, but that they will one day see their favorites take on the country’s big, established clubs.