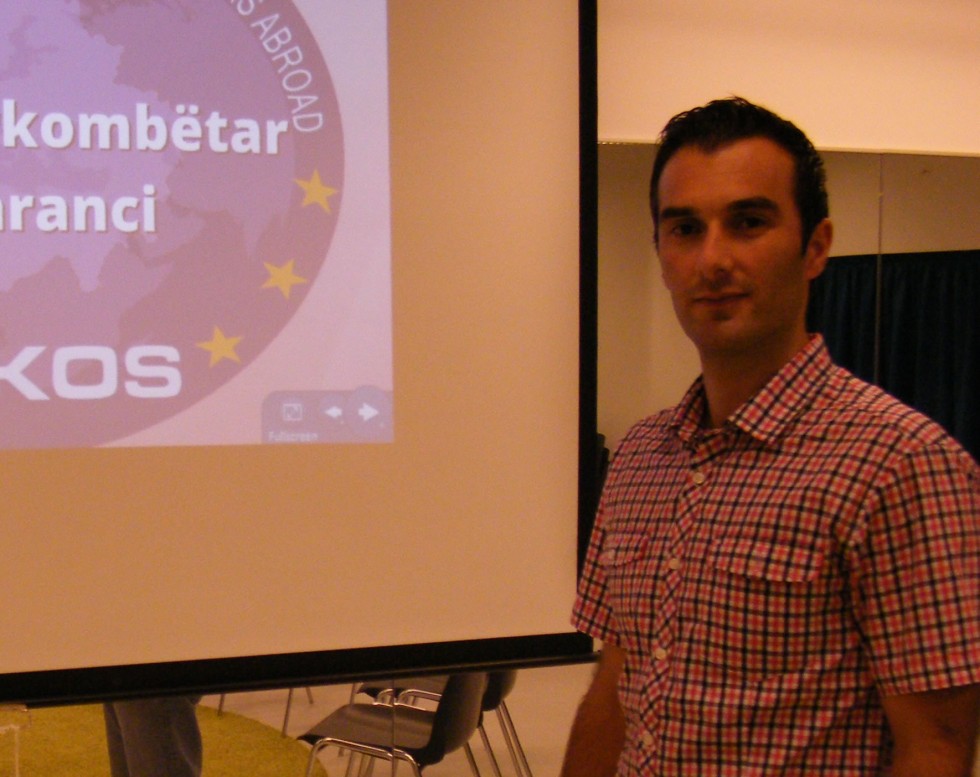 As one of the many young people from Kosovo, Krasniqi was able to excel in his career while living abroad. He has been a part of the Kosovo Diaspora for more than 10 years. While living abroad, he founded www.gjiganti.com, which is one of the largest portals that offer services to Kosovars living in the abroad.

By Albina Makolli and Albana Rama

After finished his degree in math education at the University of Prishtina, in 2002, he immigrated to Germany in order to continue his studies at the Bergische University of Wuppertal. Being a foreign student, Krasniqi tried to learn the German language, in order to be able to study at the university. Due to his financial situation, however, Krasniqi had to cancel his plans. He returned to Kosovo and started working as a math teacher. Although, Krasniqi could not finish his studies in Germany he has good memories of his
time there. The rich educational and cultural experience that he gained in Germany laid a sound foundation for his career.

Krasniqi remembers a few other things that left traces throughout his life, and which have proved helpful for his career. His studies in Germany and the diverse environment with students from around the world inspired him to get engaged in web development. Krasniqi started developing multiple projects. In 2006, he undertook a career change. He quit his teaching job, and decided to immigrate to Finland in order to seek better opportunities for himself. While in Finland, he committed himself to creating a portal for the needs of Kosovo and Albanian diaspora. He found gjiganti.com, which has constantly been enriched with new information and content.

When asked about what inspired him to develop the website, Krasniqi says that initially he had taken a break from the web before emigrating to Finland. But once in Finland, he felt he could make a use of what he had previously learned in Germany, and thus planned to create a portal in the Albanian language which would cover all areas in life. The first portal was named “gjithcka.com” (meaning about everything), but was closed after one year because Krasniqi thought that the name was not suitable for the web. However, Krasniqi did not give up on his idea. Instead, he thought of naming his portal “gjiganti” (“the giant”).

Krasniqi does not reveal much about his private life. He says that Finland offers many opportunities to keep him busy, and that he always tries to give his maximum. Apart from his work at gjiganti.com, Krasniqi often engages in voluntary work at Albanian and other foreign organizations. One of those activities that he especially enjoyed was working at a local radio station in Helsinki. He moderated radio programs in Albanian language.

Apart from working on gjiganti.com, Krasniqi has been working on another project called “rinia 21” (“youth 21”) which stand for Albanian youth of the 21st century. In order to work with youngsters, Krasniqi completed trainings in Finland, which were financed by the European Commission. Those trainings are organized by the EU agency in Finland. In Slovakia and Island Krasniqi went to acquire additional trainings, and obtained the Youthpass certificate. More information about this particular project can be found under http://www.rinia21.com.

Below you could find more details about gjiganti.com.

As the name ‘Gjiganti’ (Giant) already indicates, ‘Gjiganti- media elektronike’ is a platform that offers a giant data base with information related to Albanians living abroad. It offers sections on 19 different countries that Albanians live. One can find for instance Albanian communities or links to Albanian newspapers that are being published in the US and other destination countries. The website is being run in Albanian only and mostly by Faton Krasniqi, its founder. There are many sub-categories and one of those categories is ‘Emigranti’. Emigranti is offered in six different countries (Austria, Germany, Switzerland, Finland, Sweden and Norway), and is dedicated to providing information, guidelines, brochures and other materials which serve Albanians during the process of finding their way in the Diaspora. Emigranti has proven to be a leading portal for the Albanian Diaspora related projects and meeting the needs of Albanians in the Diaspora. Emigranti was founded in 2007.