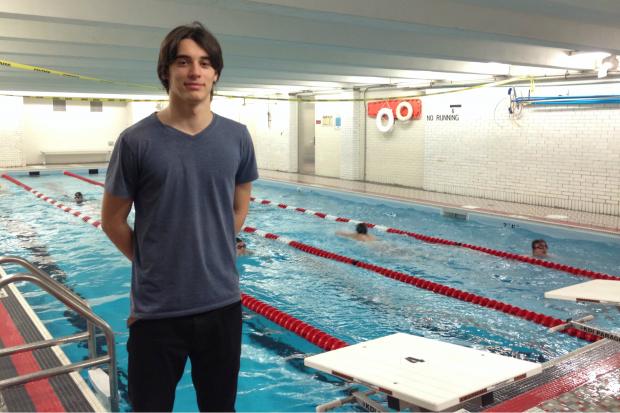 Don Geci: Lake View’s finest swimmer, aims all the way to the universe

Don “miracle baby” Geci, is the swimming star of Lake View High School but the way to the top hasn’t been easy. Today, the talented swimmer has huge passion for science and wants to study the Universe.

Don Geci nearly died several times as an infant from febrile seizures. That was when the now-16-year-old Lake View High School  junior’s family was escaping a war in Kosovo from 1998 to 1999 that would claim thousands of lives and create hundreds of thousands of refugees.

Ajtene carried Don, the youngest of her three children, for miles and miles through mountains, forests and rivers. The family — her husband Besnik, a daughter and two sons — survived four months in the wilderness before reaching neighboring Macedonia.

There, they joined other refugees on their way to Iceland, New York and finally San Diego. When they arrived in California, they had less than $50 to their name and only the clothes on their backs.

Most of the family now lives in Lakeview — where Don Geci is his high school’s second-ranked student and aspires to be an astrophysicist. He is also Lake View High’s top swimmer, powering through the pool with the same determination it took for his parents to start anew in the United States.

A Passion for Swimming and the Stars

After arriving in the U.S., Don never suffered a seizure again. He grew up in San Diego, learning to swim starting as a 4-year-old in neighborhood pools and the Pacific Ocean. He has loved torpedoing through the water since.

His affection for astronomy originated during a return trip to Kosovo when he was 10. Walking through a pitch-black forest at night, Don gazed at the sky and located the Milky Way, unblemished by any light pollution.

“I felt incredible emotions of awe and wonder when I saw it,” Don said.

Don’s teammates named him Lake View’s swimming MVP as a freshman and as a sophomore. He is a captain this year. “I look up to Don,” said senior swimmer Andriy Andrushchak, of Ukrainian Village. “He has very good leadership skills, he’s motivated, and he’s fun to be around.”

And while Don’s competitive swimming career likely will end after high school graduation, his dedication to science is just beginning. […] “He has no limit on books,” she said. “If you go in Don’s room, everything is in order, and it’s all about science. You can look around, but you can’t touch his books.”

‘My Goal Is to Study the Universe’

…Don knows how much his family had to overcome for him to be able to live what he said is truly the American Dream. “Of course, I can’t understand what they went through, but I share grit with my parents,” Don said: “My parents’ goals were to establish a family in the United States. My goal is to study the universe.”