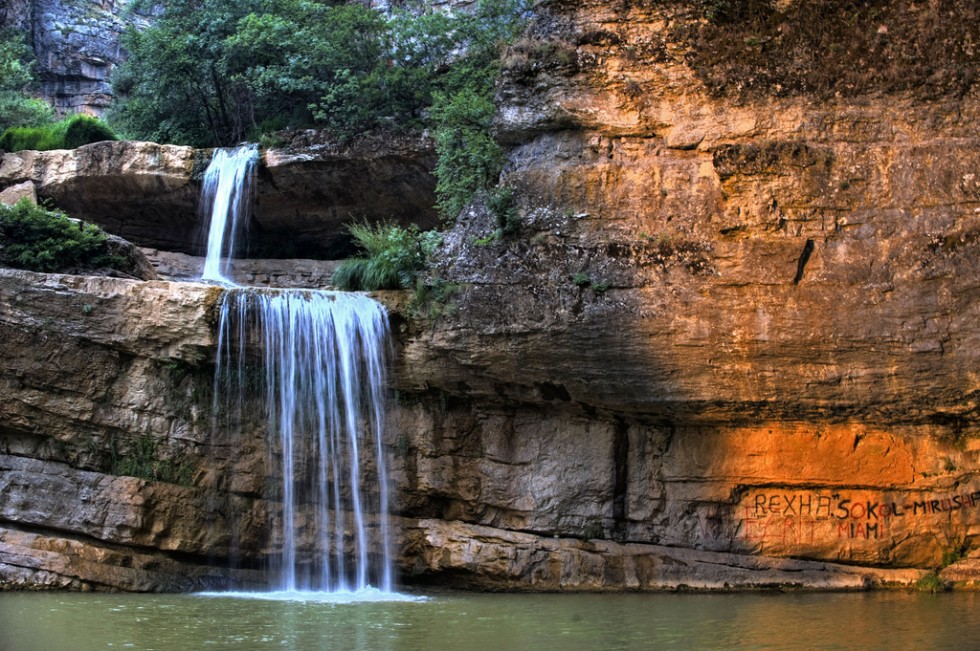 Standing there with the cold waterfall glittering in the sunlight, dancing its way over the edge, I thought, “Why do I want to do something insane like jumping through this waterfall?” Because I was in Kosovo, and in Kosovo we lived life for today, for the opportunities that might not present themselves again. Without regret.

I couldn’t swim.  Yet here I found myself at the edge of a gushing waterfall having just climbed a massive mountain in the depths of Kosovo, watching boys and men saying prayers and holding their breath before taking the plunge into the water below–while the girls squirmed and vowed never to do such a thing.   So what, then, prompted the irrational idea of “crap, I gotta do this”?

Let’s backtrack a few months. Manhattan: staring out the window of my 7th floor apartment on the second anniversary of my dad’s death. Sobbing on the phone with my mom, comforts being reciprocated as I grieved that I had no idea what I was doing with my life.  While my colleagues had tickets booked or summer work mapped out, I was still waiting for a congratulatory letter. As it turns out, I never got one; I simply received a message inquiring after my life insurance information, what I’d heard from colleagues to be the United Nations’ version of a job offer.  No time to think; my destination was a tiny town called “Pristina” in Kosovo.

A couple of weeks later, as I attempted to board the plane for my final transfer to Kosovo, my passport triggered a warning that I was traveling to a “war-torn” country.  “Yeah, 12 years ago!” I thought as I realized I had formed no initial hypothesis on what Kosovo was actually going to be like.  What little I knew of the country, aside from the history I had studied, came from my Kosovar friend from graduate school, who had cheerfully assured me that Kosovo was “chill” and that I’d have a good time. Invoking my trust in him, I decided that having gotten this far I wasn’t going to let an outdated travel warning so easily deter me.

Hours later, passport issues resolved, I arrived in the Balkans completely oblivious to how I must have appeared to my host country: caramel skin, dark eyes, flawless American accent, but wearing a headscarf (clearly not for the first time out of cultural respect) and outfitted in business casual.  Diplomat? Wealthy Arab princess? Tourist?  The guesses I got throughout the summer were far more flattering than the actuality of “broke graduate student, working at the United Nations.”

The evening I arrived, my roommates Teuta and Roland, born and raised in Kosovo yet possessing perfect English, invited me to come along to Teuta’s family’s house. A drive across the country and a few hours later, I was greeted by her aunt, parents, and grandparents, who only spoke Albanian.  But of the many things Kosovars are, shy is not one of them.  With a voracious curiosity, not even a language barrier was an excuse to not learn about someone new.  The delight of my arrival, welcoming to the family, attempts to fatten me up within the hour–this was my introduction to Kosovo.  As we headed back “home” the next day, I cradled a blood red rose from her aunt’s family garden, a parting gift as a “thank you for visiting our country,” all within my first 24 hours.

Back in Pristina, I was swept up into the busy life of working at the United Nations. As I started out poring over countless stacks of reports on the demographic scope of Kosovars since the end of the war, I painted a picture of a country where war had not just been a traumatic blot in their timeline or an introduction to Western intervention, but a reminder of the reasons for gratitude: for having survived, for having overcome, for losses that contributed to a greater cause, despite the hardships of post-conflict life.

The memories recounted from nearly a decade ago were not mired in regret or sadness, anger or desire, or even relayed with drama or a plea for sympathy; they were recollections, parts of an entire lifetime, reminders enforcing the idea that we cannot forever brood the unfortunate events in life: they are what they are and we still have lives to live, people to love, goals to accomplish.

In Kosovo, it wasn’t all about the war.  It wasn’t comparing and contrasting life as an American to life as a Kosovar.  It wasn’t about right and left, Muslim and Christian, about why things were as they were.  It was about working together to clean out an art studio flooded by torrential rain, not lamenting the lost studio space, but strategizing on where the next space would be.  It was about going to the street market to pick up fresh vegetables for soup in the evening, and chatting with vendors as the sun set in the background.  It was about coffee with family and friends, coworkers and new acquaintances – before work, during work, after work, and every moment in between.  It was about my boss’ Kosovar daughter dating a Serb and her husband’s anxiety that his daughter was dating anyone.  It was about rapping to YouTube videos with my roommate’s teenage cousins Drita and Zana, and our sick addiction to Jack Bauer’s adventures in “24.”

It was about here, and now.

As my friend Valëart explained over a plate of tiramisu one evening, “don’t worry about anything; this is Kosovo, we’re laid back.”  I had come to Kosovo to help with the development plans of the country, but what I found was that this tiny country of resilient people with no ties or need for me were the ones who were helping me, teaching ME how to live a fulfilling life.

So, standing there with the cold waterfall glittering in the sunlight, dancing its way over the edge, I thought, “Why do I want to do something insane thing like jumping through this waterfall?” Because I was in Kosovo, and in Kosovo we lived life for today, for the opportunities that might not present themselves again.  Without regret.

As I sliced through the warm air without a life jacket, seemingly solo, my ears filled with the thundering cheers and applause of hundreds of people below, people whom I had never met, who knew nothing of who I was or why I was there.  Very much the Kosovo way.  And the first thing I thought when I hit the water was “I’m alive!” Not in the sense that I was still a breathing form of intact flesh and bones, but that despite being so far from the life I’ve known, from the roots of my sorrows and anxieties, here my soul had come alive.

There are many days I’m glad that I kept a journal while in Kosovo, but even without the words documenting my experience at the time (which you can read), there is no way to explain the inner happiness, and sense of peace I found in the “war-torn” country of Kosovo.