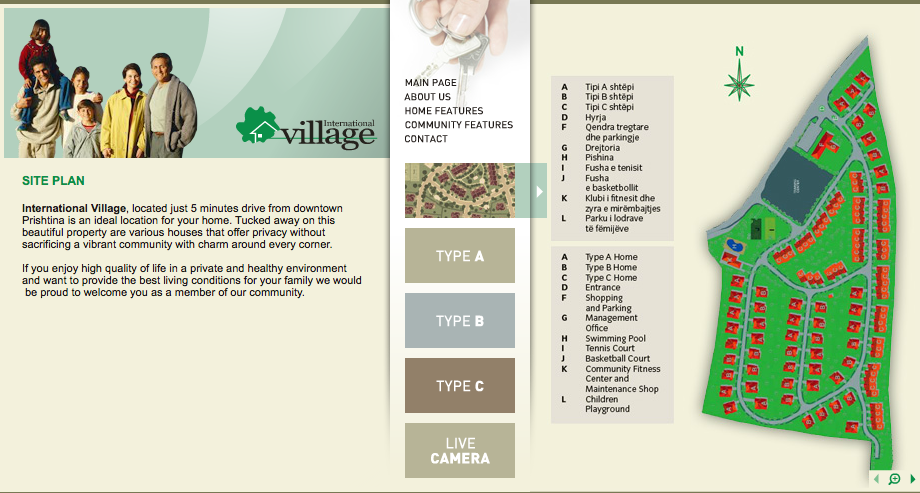 Skender Ghilaga (Xhilaga), the president of the New York-based Services Group International Inc., and a member of the Albanian Diaspora, returned to the Balkans to invest in the region’s development. Ghilaga’s real estate project, the International Village in Pristina, Kosovo has had positive spill-over effects not only in the economy of the municipality, but also to the communities living in the area. As a result of the project, communities were provided with proper infrastructure, and were presented with a model for social facilities for the needy and handicapped families in the city.

Skender Ghilaga born in Albania has lived and worked in different places. After leaving Albania in 1939, Skender lived in Greece, Turkey, Belgium and the US. Additionally, he spent considerable time in France, England and the Middle East for professional reasons. He has worked in the area of consulting engineering and construction since 1958. He later founded the Services Group International Inc. (SGI), which specializes in real estate development and financing. Ghilaga lives in New York, and is the president of the company. Information on his projects for engineering and real estate development can be found in the SGI profile.

One of the pioneering real estate and housing development projects in Kosovo, was the SGI International Village project in Pristina, initiated in 2005. The International Village did not only introduce a new way to building housing communities in the city, provide shelter for various families in need, but also helped shape Kosovo’s legislation in real estate development.

Ghilaga’s company SGI started the search for land to develop the International Village Project in Pristina, the capital of Kosovo. After they won the tender competition of the Pristina Municipality in 2004, his company formed International Village SHPK as the majority stakeholder. At that time the Pristina Municipality was under United Nations (UN) administration. SGI negotiated with the UN legal department, and set the first precedent by enacting United Nations Regulation No.2005/13 in March 2005 for long term privatization of public land, and obtained a 99-year lease with the UN in April 2005.

In return for the privatization and the lease for the land, the SGI constructed and donated to the Municipality and the Directorate of Social Works a new building comprising of 50 apartments to be distributed to the needy and handicapped Kosovo families. This building now stands at Fusha e Pajtimit area in Pristina, and was handed over to the Municipality in 2011 at a public ceremony. The Municipality of Pristina, at their request, also granted by SGI the rights to build identical social buildings for other families. SGI, at their expense, provided infrastructure to the neighborhoods of International Village so that the inhabitants in the area could have adequate access to energy, water, and sewage treatment facilities for a total of 1,500 people. The total cost of the International Village Project was about 26 Million Euros.

Investment in Kosovo was considered risky due to its post-conflict reconstruction, political uncertainties, and economic transformation. This risk however, did not stop Diaspora businessmen such as Skender Ghilaga and his partners, to invest and champion new ways for economic and social development in Kosovo.