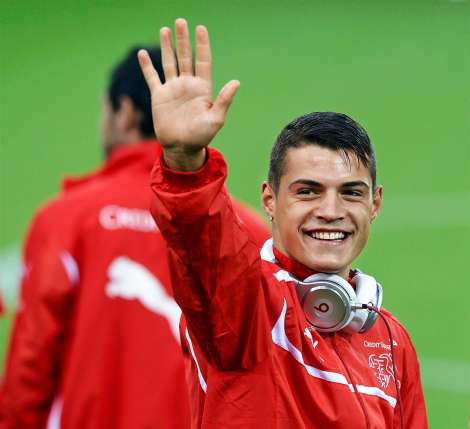 In the summer of 2012 the German team Borussia Mönchengladbach signed the 19 year old Granit Xhaka from Swiss FC Basel. Although Xhaka was signed last year, the rumors were spread that the young teenager struggled to find his place in the new team during his first year. This summer the reports continued that Xhaka was leaving Borussia Mönchengladbach for another team. The central midfielder has finally been adopted to the German team and decided to make a more visible contribution.

17 rounds into the German League Bundesliga, Granit Xhaka has been at the start eleven 16 times and missed one game during round seven due to a yellow card suspension. Xhaka got injured a couple of days ago, leaving the football start with a broken a bone in his hand. Despite having a cast covering his left hand, Granit Xhaka was able to play the entire game for Wolfsburg in the last game of this year.

The former Swiss U21 captain, Xhaka, has also debuted in the Swiss Senior team this year and has been qualified for the World Cup that will be held in Brazil next year. We hope to see the Albanian football star grow in the National team as well. BBC has quoted that “Formerly a winger, [Xhaka] now plays in central midfield and has been compared in style and talent to Germany’s Bastian Schweinsteiger by Hitzfeld.” A future Schweinsteiger? Let’s see what Granit Xhaka will do for both Borussia Mönchengladbach and the Swiss NT next year.