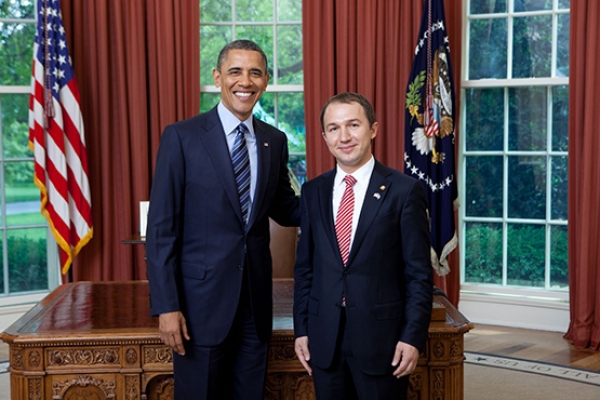 The prestigious Diplomatic Courier has recently featured an interview with Kosovo’s Ambassador to the United States, Mr. Akan Ismaili. Whilst a successful entrepreneur, Mr. Ismaili has been an active contributor to the cause of brining Kosovo closer to the global community. Co-founder of both the American University Foundation in Kosovo and IPKO (an organization credited with fostering internet as a development force in Kosova), Mr. Ismaili has a rather interesting take on the question of digital diplomacy.

The following is an excerpt from the interview; for the full article and  interview please click here.

[Diplomatic Courier:] Kosovo has earned a reputation for setting a precedent in the use of social media and digital diplomacy. How do you define digital diplomacy for your country? How did it become such a prominent feature of Kosovo’s foreign policy?

[Akan Ismaili:] It is quite obvious that in today’s world, where the competition among the countries is growing rapidly, the tiny countries receive less attention and a sort of limited space. In light of this, for a small country with limited odds, such as Kosovo, the most effective means to mark our presence worldwide and to strengthening our nation branding is digital diplomacy. That’s one side of the coin. The other side was to use social media tools in order to get your message across; to be much more present. As a matter of fact, the online presence sometimes matters as much as the physical presence, maybe even more. Technology gives us tools available to enhance traditional diplomacy, to make it easier, make it more affordable, and be more efficient and effective.

[DC:] When it comes to public diplomacy, what has changed about the toolbox?

[AI:] There is no doubt that changes are visible. We are now much more effective and efficient. Every day you find a new use and more creative use for the tools just because they are not as limited as in the traditional sense. The other thing that has changed is timing. Timing is everything. You have to be there at the debate when it happens, while it’s happening, otherwise you are too late, everybody moves on much faster than in the traditional sense of diplomacy.
[DC:] What are the dangers of that; moving that fast in real time?

[AI:] Sometimes you get a feeling that it’s very superficial, like you don’t go deep enough into the issue. But that’s why this is not the only way you do diplomacy. That’s why you continue with the other tools available to conduct diplomacy. So, it’s not just moving with a crowd, but you also have people who stay behind and continue that work on the lower levels and lower layers.

[DC:] When we’re looking at the future of diplomacy, some commentators out there are saying that face-to-face diplomacy is sort of dying.

[AI:] I disagree with that. I think that’s still an important element. I don’t think that Twitter and Facebook replace diplomacy. I believe we have a new tool set and it’s more of a tool set of communicating with the public than replacing the traditional way of communication between the countries, because I don’t think Twitter can replace six hours of negotiations when you need a treaty. You cannot do that over Facebook; it’s impossible to do that over Twitter. You still have to have experts sitting around the table and nailing down details. What this does is to uncover the wider opinion and the important elements of what’s actually taking place in real time; exposes it a little bit more and makes it more transparent. And this is where I think public pressure comes into play because people know in real time what’s going on and why things are happening. That’s why it’s becoming harder and harder for people to keep closed societies because these tools are there. If government controls media, they cannot control Twitter, they cannot control an individual tweeting or sending information from a Twitter. Everything is becoming more transparent and more open because the technology is available to everybody.