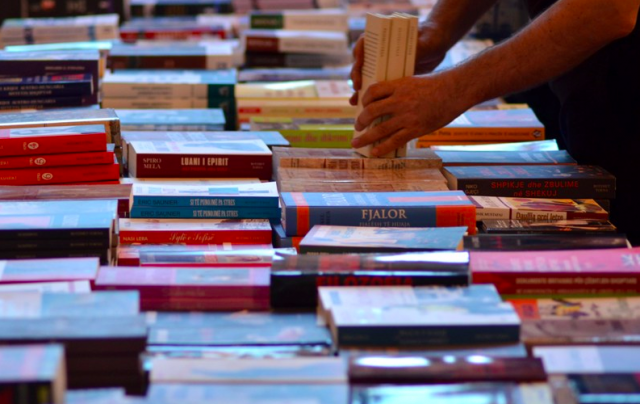 More than 50 authors from Albania, Bosnia and Herzegovina, Bulgaria, Croatia, Kosovo, Montenegro, Macedonia, Serbia, Slovenia, Romania and Hungary presented their works on the Book fair in Leipzig, bringing the readers a mosaic of Balkan literature and its modern tendencies.

Poets, storytellers, literary critics and experts discussed the dynamic and to some extent even dramatic changes of cultural expressions in the southeastern Europe. The similarity of the brutal dictatorial past once again proved to be an inexhaustible inspiration for the Balkan writers.

Since 2014 marks the 100th anniversary of World War I breakout, literary reflections on this major historical event, triggered by the infamous Sarajevo assassination were one of the highlights of Leipzig’s Book fair. One of the writers who discussed the topic was Fatos Buxhaku from Albania who wrote a book titled “The Red Umbrella- Story of Austrian-Albanian fates in XIX-XXI”.

Following what’s been turned into a tradition by now, authors in this fair were not grouped based on countries or languages they represented, but in panels with authors from multiple countries. “Turkish or Greek coffee, Albanian or European?  Slovene or Yugoslav?” – was the name of the panel in which Besnik Mustafaj from Albania and Goran Vojnović exchanged thoughts. They discussed topics based on experiences they lived through and spoke about in their works; they talked about their stands and perspectives regarding cultural stereotypes, prejudices and ideologies that shaped one’s depiction of the other despite close vicinity (vicinity which shows similarities in tradition, culture and language).

The Albanian-Hungarian panel had Arian Leka and Gyorgo Spiro discussing “The absurdity in the life of people under dictatorship”. In his novel “Discretization” Gyorgo writes the story a Jew who despite being a determined communist is arbitrarily declared a criminal and communism’s enemy. Through this character the author elaborates on the Roman’s dictatorship massive terror. Arian Leka, on the other hand, tells us about the Port of Durres and how it turned into a diplomatic window in a hermetically closed Albania, enabling people to communicate with the world that they were no longer visiting or seeing.

In another rather interesting presentation, an Arberesh spoke about his fellow-men in Italy, their language and culture and their relations with ethnicities in Italy and the Mediterranean region, as well as of what it meant to be part of multi-cultural societies.

Stories of emigrants living between two languages and worlds were also portrayed on this fair, in the panel “The multi-voiced southeastern Europe, The multi voiced Switzerland”. Shaip Beqiri from Kosovo who writes in Albanian and Eugene Meiltz from Romania who writes in French exchanged their takes on this particular topic.