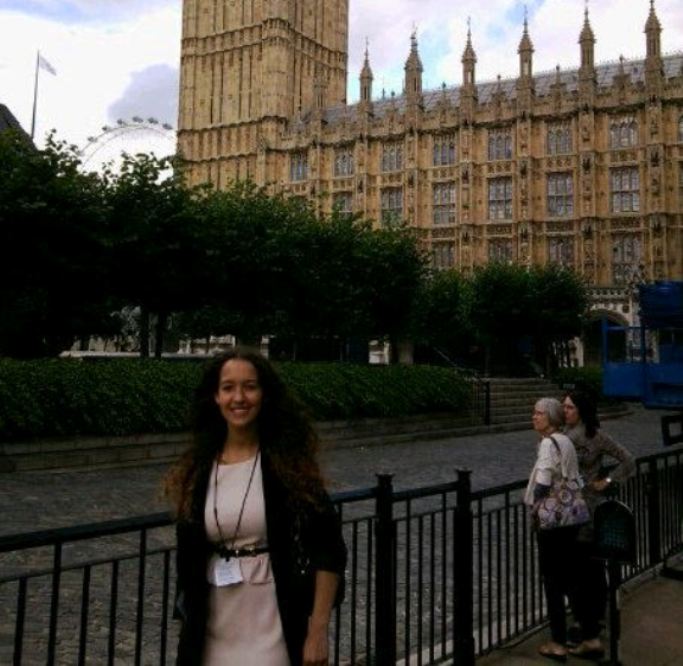 A refugee from Kosovo: selected for the UK Government’s competitive internship programme

Endrita Salihu – another story of success of a young lady from Kosovo, who fled the country with her family during the war of  1999. She was one of the sixty among the thousand applicants to be selected to intern at the United Kingdom government and shadow the Parliamentary Under Secretary of State.
Endrita Salihu of Kosovo origin, was one of the 60 students in the UK to be selected to participate in the competitive Whitehall Internship program organized by the Social Mobility Foundation. Thousands of students across the country have applied. The aim of the program is to increase diversity within the UK Civil Service. An objective that is supported by Lady Warsi, something she expressed during her speech at the opening ceremony held at the Foreign and Commonwealth Office.
Endrita Salihu said: “Being chosen to be one of the 60 interns was prodigious and overwhelming! I was allocated to the Department for Communities and Local Government (DCLG) where I worked in the office of Peter Schofield, Director General for Neighbourhoods.  During my time at DCLG I was also given the chance to shadow Andrew Stunnell OBE MP, Parliamentary Under Secretary of State, at a meeting about housing plans and then attend an extremely informative question and answer session where I was able to find out about the work of a minister and how to become a minister. As a young person who moved to the UK as a refugee fleeing the horrific war of Kosovo in 1999, I felt privileged to meet the decision makers who have helped me so much. Being from Kosovo, my parents have always taught me about the history of Kosovo and it’s fight for independence, something, which I believe, has inspired me to want to study International Politics at university.  As it is a small country in the Balkans, it felt great to be able to represent my country and put Kosovo back on the map!”
***
Below you can read an article that the Guardian has published:

Whitehall intern gets a taste of the service

Coming to this country as a refugee after escaping the Kosovo war in 1999, I never believed that I would be given the chance to meet those who made the decisions that have, in essence, changed my life.

From a young age, through learning about the history of Kosovo and it’s fight for independence, I’ve been taught how important it is to have positive relations between countries. This is what has fuelled my desire to study international relations at university and embark on a career in politics – an area that has interested me since the age of 12.

Having embraced my passion for politics, and my desire to enter the political work field, my politics teacher informed me about the Whitehall internship, which he believed would help my future prospects. When I found out about it my initial reaction was to find out more and apply.

The aim of the internship, set up by the Social Mobility Foundation, is to promote social mobility and increase civil service diversity by targeting under-represented groups. It’s an aim which is supported by Baroness Warsi, minister without portfolio, who showed her enthusiasm for the internship at our opening ceremony. Head of the civil service Sir Bob Kerslake, who fully supports this scheme and who I got to meet, has also spoken up about how important it is for the civil service to be diverse.

From numerous applicants, 60 year 12 students were chosen to participate in the scheme. All of us were split across the different government departments in Whitehall. I was allocated to the Department of Communities and Local Government (DCLG) where I worked in the office of Peter Schofield, director general of neighbourhoods. The department has had heavy focus in the media in recent weeks due to the Portas pilot scheme, tackling council tax fraud as well as looking how economic growth can be increased via the regeneration of cities.

During my time at DCLG I went to a variety of meetings, shadowing both directors and director generals who were discussing how to tackle the issue of economic growth. I was also given the chance to shadow Andrew Stunnell, parliamentary under secretary of state, at a meeting and then attend a question and answer session where I was able to find out more about minister’s workloads and the type of jobs they have to complete day to day.

Having attended these meetings and met such influential people, I gained an insiders knowledge of what it was like to work for the civil service and the pressures placed upon civil servants. Furthermore, I was also able to shadow members of DCLG’s legal team and also meet litigation lawyers at the Treasury’s solicitors department as well visit the supreme court. The people that I communicated with have stimulated me to widen my horizons and aim high. They were all immensely encouraging and helpful, and were always willing to answer any questions that I had.

Being in the environment that, in the future, I would like to work in was astounding. I was able to learn more about the civil service and the different career options within it. All the information that I obtained was enormously beneficial and helped me come to the decision that I would like to become a fast streamer in the Foreign and Commonwealth Office once I have graduated.

The experience has been overwhelming, inspiring and definitely enriching and I would recommend everyone, especially those interested in politics, to apply.

Endrita Salihu is 17 and studying for her A Levels at Cardinal Newman College in Preston. You can find her on Twitter: @EndritaSalihu

This article was published by Guardian Professional. Join theGuardian Public Leaders Network free to receive regular emails on the issues at the top of the professional agenda.